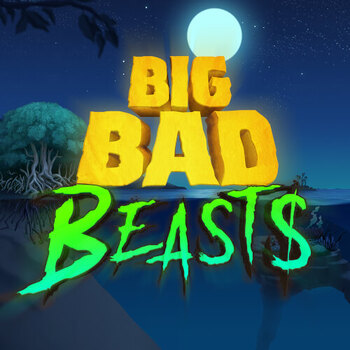 Unleash the bestial creatures within and win wild at Big Bad Beasts. Golden Rock Studios comes with an online slot game created with five reels and five paylines. The game will take players through the territory of the jungle depths as the reels are spun. Opportunities to win 1,020x the stake is at hand with various bonus rounds for extra prizes. Golden Rock Studio made sure the slot game can be played anytime and anywhere. There is no chance to miss out on the fun whether in the comfort of your home or while traveling. Big Bad Beasts plays with high volatility paired with a standard 96.55% RTP value.

Players will enjoy Big Bad Beasts' theme. It takes place in different areas across a vast jungle. Certain wildlife such as an eagle, a crocodile, a shark, a puma, and a tiger can be seen as game symbols. The slot game background is teeming with exotic trees, clear blue water, coral reefs, and more. Overall, the visuals play well with the soundtrack consisting of drums and other ethnic instrument sounds. While in play, players should be wary of animal symbols. These give out more rewards than low pay numbers and letter symbols. The tiger serves as the highest paying symbol for giving 200x the stake for five-of-a-kind.

Big Bad Beasts have a pack of features ready to attack. Wilds can substitute other symbols to complete winning lines. A winning line of animals with a wild symbol presented gives five free spins. Every wild symbol means an extra free spin which is added at the end of the round. During free spin rounds, a special symbol will pop up at random to give players the prize amount from the start of the round. Let out a roaring win. Play now.