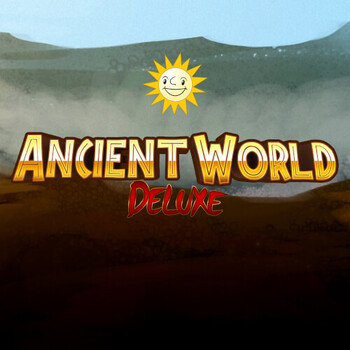 Journey back in time when dinosaurs ruled the earth in the Ancient World Deluxe slot. Enjoy  free spins with scatter wilds and expanding symbols to boost your chances of scoring big wins. Place a bet of 0.10 to 20 credits per spin, playable on all devices.

Set on a 5x3 grid and 10 fixed paylines, payouts are awarded when at least two matching symbols land from the leftmost reel to the right. The reels are populated with symbols depicting the era from dinosaur eggs, an amber-preserved mosquito, and dinosaurs alongside the lower-paying 10-A royals. The top paying symbols are the exploding lava mushroom and dinosaur each awarding 200x and 500x the stake for five on a payline. The volcano is the Scatter Wild and replaces all other regular symbols. Landing 5 scatter wilds on a line earns 200x the bet.

Activate the bonus round by landing 3, 4, or 5 scatter wild symbols anywhere on the reels. Before the round begins a random symbol is selected as the Special Expanding symbol. Landing 2 or more of these symbols expand the three rows high to fill each reel where payouts are awarded based on scatter pays. The round can be retriggered by landing 3 or more scatter wilds. A second expanding symbol is then chosen for the remainder of the feature.  Players receive an unlimited number of free spins for as long as at least 3 scatter wilds land on the reels, unlocking all pay symbols as expanding symbols with scatter pays.

The game has a card and ladder gamble feature where players can double their winnings or climb the ladder steps to score wins of increasing values. Losing the card game or dropping to the bottom of the ladder means you lose all winnings. Players can also choose to collect half of their total, and gamble with the remainder.

Register to Ancient World Deluxe at Genting Casino and start spinning. Always set your budget for the session and never stake more than you can comfortably afford to lose. Enjoy the game responsibly.