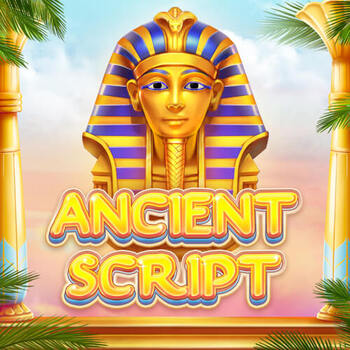 Explore ancient Egypt amidst palm trees, the pyramids, and hieroglyphs in the Ancient Script slot. Not far from the river Nile, hidden treasures of the Pharaoh await those who dare. A lucrative Expanding Tiles feature, the Mysterious Globe and Free Spins increase chances of potentially hauling big wins.

The game plays out in ten fixed paylines, five reels and three rows with golden stone pillars on each side. A mysterious globe sits upon a pillar to the right of the reels which can activate on any spin, causing reels to expand into big winning combinations. Start your exotic adventure with a stake of 0.20 to of 500 per spin, playable on all devices.

Winning combinations are formed when three or more identical symbols land on a payline, from left to right starting on the first reel. The colorful classic card suits are the low pays awarding from 50x to 90x the bet for landing five matching symbols on a line. The golden amulet, the instrument, and the Eye of Horus earns up to 100x, 150x, 200x the bet for 5 on a line, respectively. The golden pyramid icon is the symbol with the highest worth awarding up to 400x your bet for 5 matching symbols.

The mask of Tutankhamun is the wild symbol and steps in for all other paying symbols to create potentially more winning combinations. Land 3 mask wilds together on the reels to launch the free spins feature. Every win during the free spins round awards the expanding tiles feature, which means while reels can fill with the same symbol to create bigger wins. The expanding tiles feature can also trigger at random during the base game for some great winning opportunities on any spin. There is no bonus feature in this game but it makes up for this with a maximum 500x the bet per line payout.

Register to Ancient Script on Genting Casino to embark on your adventure by the Nile. Only spend what you can afford to lose.  Check your play summary often to see your spending habits.