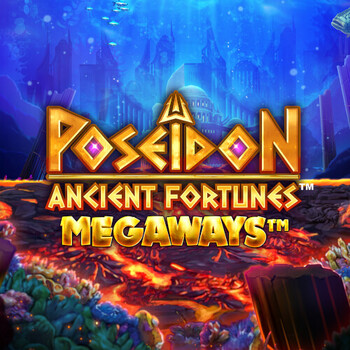 Produced by
MicroGaming
The Ancient fortunes: Poseidon Megaways slot is one of Microgaming’s Megaways engine, meaning that the amount of symbols on all the six reels changes with every spin. So, this changes the numbers of possible ways players can make a winning combo. In addition to that, the slot's RTP is 95.98% but this is below the 96% standard average. Continue to read on to learn more. Hop on the wagon and experience the old Greek sea god in his kingdom and play Ancient Fortunes: Poseidon Megaways. Enjoy its features such as the Free Spins round where the Rolling Reel earnings bring an increasing multiplier to play. Additionally, there’s a click and pick feature that allows players to select 1 out of 4 jackpot prizes, which can be worth an exciting 5,000x stake.

Knowing that their inspiration comes from Greek mythology, the initial slot of this series brought, Zeus, while Poseidon Megaways is centred around the Sea god, Poseidon. You will also find many standard Megaways attributes present, along with superb offers, but only a below-average RTP. Triple Edge Studios in conjunction with Microgaming give players the chance to play Ancient Fortunes: Poseidon Megaways slot online.

When you play Ancient Fortunes: Poseidon Megaways slot, you will find six reels. These reels could reach 117,649 Mega ways active during its finest rounds. Additionally, players could trigger a fixed jackpot close to 5,000x alongside other kinds of great prizes in this explosive release. Its special attributes rely on the scatters, rolling reels, Jackpot Pick, free spins, wilds and multipliers.

Now with the Megaways setup that permits up to seven symbols to appear on the six reels, a player can get many combos and paylines. Once players create their blends, through 3 matching symbols, the game activates a Rolling Reels mechanic. It usually appears in these games by taking each symbols included in the win and replacing them with fresh ones.

Now another feature is the Jackpot Pick, which can give players a feature that transports various offers, including the fixed jackpots. It ranges from 15x to 50x, 100x and 5,000x the stake. Also, the scatter symbols, which players require landing on four consecutive reels and creating the word GOLD with each letter, will get the player to the round of free spins.

Emerging only on the extra top reel are the wild trident symbols. Now firstly, they restore pay symbols to complete winning combinations. And two, when wild symbols display, whether they are among a win or not, players will collect them in a chest in the bottom left corner. When players complete the Rolling Reels, there is a chance to trigger Jackpot Pick.

We must say the gameplay is the standard for any slot that has Megaways attribute. The main addition is Free Spins bonus round with an increasing multiplier, which is good. This Jackpot Pick feature can also appear randomly. Once activated, players will get to pick from 12 tokens. As a result, we say, join the old Greek god Poseidon in this exciting Microgaming slot.