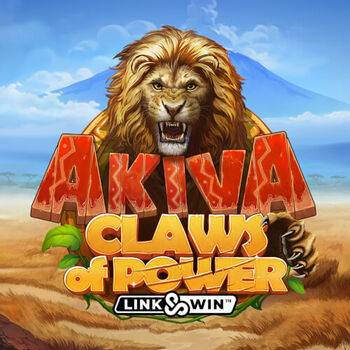 Produced by
Games Global
Go deep into the wilderness when you play the Akiva, Claws of Power slot game. Animal-themed slots are a favourite among players and one that features the majestic animals of the safari is always a good choice. Come face to face with lions, hippos and zebras in this 5 reel slot with 25 paylines and a max win of x2500 of your stake. Multiple bonus features can come your way and trigger at random. These can help increase your potential win as you spin the reels of the Akiva, Claws of Power online slot.

The Akiva, Claws of Power slot machine is a 5 reel, 3 row, and 25 payline slot game developed by Foxium. The game uses the Link and Win system. The Link & Win feature is essentially a respin feature that resets every time a specific symbol is landed. It can be triggered by landing 6 to 14 special Link&Win symbols in any position on the screen. Each of the symbols has a monetary value that is added up at the end of the feature and awarded to the character. The RTP for Akiva, Claws of Power is 96.20% which is above the market average and the volatility is Medium. The hit rate for Akiva, Claws of Power is 28.28% which means in theory the game can land a win in every 4 spins. The maximum possible win for Akiva, Claws of Power is 2,500 times your stake. It is playable between 0.20 to 100 which makes it attractive to high-rollers and even new players.

This feature can be triggered at any time during a spin. Akiva alters a number of symbols on the reels to create winning combinations.

When Claws of Power triggers, claws swipe the reels, shuffling them to create winning combinations, similar to the previous extra.

Landing three drum scatter symbols on reels 1, 3, and 5 awards five free spins. For this round, reels 2, 3, and 4 merge into one reel with large symbols. Except for big scatters, which count as one symbol, big symbols count as nine symbols. Finally, free spins can be retriggered.

The theme for Akiva, Claws of Power is the African wilderness. The symbols within the game match the theme perfectly. The bright J-A card symbols come first, followed by an antelope, a zebra, a hippo, and Akiva as the four high pays. A five-of-a-kind winning line pays 2-3x the bet for lows and 7.5 to 20 times the bet for highs. Wild symbols that appear on all reels can assist by substituting for all pay symbols. A five-wild winning line is worth 20 times the bet.