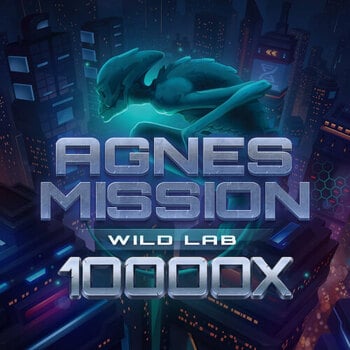 The Agnes Mission Wild Lab slot game has a rather conventional and easy-to-understand layout. Three rows and five reels make up the grid, and there is an additional special horizontal reel at the top where only certain symbols can land. There are 20 ways to win in this game, and for a winning combination to form, the symbols must land on adjacent reels beginning with the first reel on the left.

The limited betting selections in Agnes Mission Wild Lab slot online, which only go from 0.20 to 25 per spin, may entice some gamers.

The already fantastic sights of the Agnes Mission Wild Lab are enhanced by excellent graphics. The backdrop captures the mood of the game while the reels are meant to appear fairly futuristic. A city skyline with tall skyscrapers and flashing lights can be seen at night.

These symbols, which are presented as 9-A royals, represent the low-value group, whereas the high-paying symbols are represented by a microscope, test tubes, security guards, a scientist, and a boss. The boss, the highest-paying symbol, can return 20 times the wager for a payline that is completely covered.

Cash symbols, gather symbols, and wandering wilds are among the special symbols in the Agnes Mission Wild Lab that have a big impact on gameplay.

Thanks to mild volatility, which might provide comparatively frequent prizes at moderate prices, you may anticipate reasonably balanced gameplay. Additionally, there is a maximum win potential of up to 10,000 times the initial wager.

The Agnes Mission Wild Lab RTP is limited at a strong above-average value of 96.23 percent by the developers, however there are also a few low alternatives accessible.

Agnes Mission Wild Lab online slot has amazing bonus features. The Collect and Embryo symbols are awarded by the Extra Reel, which is located at the top of the grid and is crucial to the game's additional features.

The Toxic Mutation function can be activated at any time at random and seems to occur pretty frequently. The grid will then start to fill with a poisonous fog that reshuffles the symbols for an assured victory.

Agnes Coin cash symbols appear on the standard grid and have arbitrary monetary values. They can also show one of four jackpots, the Mini, Minor, Major, and Grand jackpots, which pay 25 times, 100 times, 500 times, or 2000 times your initial wager, respectively. To collect and win these rewards, there must be at least one Collect Symbol on the Extra Reel.

When the Embryo Symbol appears on the Extra Reel, the Walking Wild Lab Respins function is triggered, and the reel below becomes a full Walking Wild. Every respin, the Walking Wild takes one step to the left, and Embryo symbols boost the multiplier by one (up to x5, at best). New walking wilds are also added, and the feature ceases when none are visible. Just to be clear, the respins are not paid spins.

Each Embryo symbol that occurs is also added to the Embryo Metre; the Agnes Mission Mode is activated when you have 12 symbols total. When the Walking Wild Lab Respins feature activates, at least 2 reels to the extreme right are turned wild, and the hit rate for Coin Collects and Walking Wilds is increased during the feature.

Even with average graphics, Agnes Mission Wild Lab slot machine has a charming aesthetic appearance. The soundtrack is interesting and won't make gamers become bored. The respins feature is entertaining and has a potential payout of 10,000 times your initial bet. For both new and experienced gamers, this game is a definite must-try. Play Agnes Mission Wild lab and win.