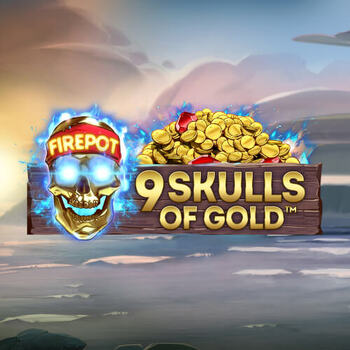 Produced by
MicroGaming
A casino slot machine from Buck Stakes Entertainment called 9 Skulls of Gold slot follows four pirate women as they search for wealth. The characteristics of 9 Skulls of Gold game and the previously published Money Mines, in which we descended into a fantastical universe, are nearly identical. The female pirates have the power to grant both cash prizes and spins in the base game. There is also the Firepot feature, which awards 2000X the bet for 9 Skulls of Gold in a single spin. Play 9 Skulls of Gold for as little as 0.20 per spin.

About 9 Skulls of Gold

The setting of 9 Skulls of Gold slot game is stunning. Players will witness a beach, a few peaky rock structures jutting out like small islands, and small waves washing in. In the Firepot feature, where you can win up to 2000X your wager in a single spin, the reels are positioned to the right, and the wins are displayed to the left. Despite the lack of lyrics, the music has a cover band feel and sounds like a sing-along song. You must align at least three identical symbols on a payline running from left to right, beginning on the first reel to the left, in order to win. The game 9 Skulls of Gold is playable on all platforms, including PCs, notepads, and mobile.

The four main characters, exactly like in Money Mines, are the lower-paying symbols. The female pirates are a captain with a purple hat and a parrot perched on her shoulder, a dark-haired lady with a green bandana, a red-haired woman with a blue bandana, a brown-haired woman with a yellow bandana, and a woman with brown hair. In the base game, landing a win of five of these women will pay between one and two spins, and during the bonus spins, between one and two times the wager.

Three variations of the number 7 are the higher-paying symbols. The payout for a 5-symbol win with singles (seven), doubles (77), or triples (777) ranges from 7.5X to 37.5X the original wager. Any time you combine five 7s to form a winning combination, you'll receive 2.5X your wager. The Wild Symbol can pay up to 125X the bet on its own and can be used to replace any of the other symbols specified. The Scatter Symbols and the Firepot Symbol are not replaced by it.

9 Skulls of Gold has amazing bonus features. A W is used to symbolise the Wild Symbol. It does not replace the Scatter or the Firepot, only the other regular paying symbols. It also pays independently, returning 6.25X, 25X, or 125X the wager for a win with 3, 4, or 5 symbols, respectively.

Randomly, the Scatter Symbol transforms into a golden one. The box next to the reels contains the golden scatters, which can grant up to five more bonus spins.

The Firepot logo depicts a skull in flames wearing a red bandana. Any reel on which it appears will provide a cash prize if 3 to 9 symbols land there.

Depending on what the bonus wheel awards you, the initial number of spins for the bonus spins might be anywhere from 10 and 30. Depending on how many golden scatter symbols you gathered, you could possibly receive up to 5 additional spins from the chest. A 2X or 3X multiplier will also be applied to all winnings besides the Firepot. By getting three scatters, the bonus spins can be restarted. You will receive exactly as many spins as the wheel gave you.

9 Skulls of Gold at Genting Casino

The very appealing casino video game 9 Skulls of Gold has a female pirate motif. The Firepot is a fairly reliable feature that begins paying as soon as three symbols appear anywhere on the grid. You can win up to 2000X your original wager in the Firepot. Play 9 Skulls of Gold and win.