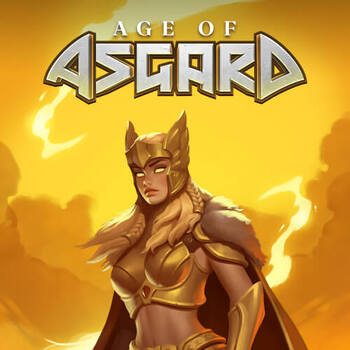 Join this epic battle between good and evil by playing the Age of Asgard slot. The reels are set against a somewhat gloomy background of ice and snow during a gloomy Nordic winter.

With 5 reels and 40 paylines, its unique reel setup is a characteristic that grabs our attention. It uses a Double Machine mechanism in place of conventional reels. It is primarily a narrative-driven slot where good fights evil. The Asgardian heroes occupy the upper half of the 5x3 reels, while the villains take up the lower half.

Three symbols high, two wilds stand. The female warrior is the first wild, and the monster is the second. If they show up on the center reels, 2, 3, and 4, they can replace other symbols to form winning combinations. As soon as the wilds pitch, a new spin is initiated. During the re-spin, they will stay stuck on the reel. A further re-spin is given for each wild symbol that appears during a re-spin. One outstanding feature of the re-spins is that you can earn 960 times your wager if sticky wilds cover the full set of reels. You will win 1,200 times your wager if you use the feature while in the Bonus Spins mode.

When competitor wilds emerge on the opposing reels, the Clash feature begins. They will start a wave of 2, 3, or 4 smaller wilds. Random wilds cover the entire stacked wild if they fall on the premium symbols. When three free-fall symbols land on the top or bottom reels and start 10 free falls, the Bonus Spins feature is activated. 50 paylines are used when playing the bonus spins on a five by six-reel setup. The fact that both wilds appear and stack up to six symbols high during the bonus spins is a really appealing feature. The range of bet sizes is 0.2 to 60.

Any smartphone can play Age of Asgard at Genting Casino; all you have to do is register and set a spending cap.