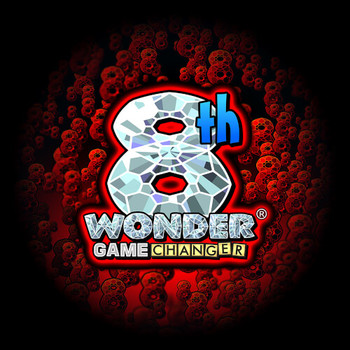 It does sound intriguing to hear that there is a game called 8th Wonder Game Changer. Something that many developers want to achieve because it fosters curiosity about the game even before it can be launched. So far it does have a unique game structure made up of 3 reels and 3 rows, which is what old slots were set decades ago, however it will probably make a comeback with this game.

Made by  Realistic Games' Game Changer has 5 win lines and can expand into 5 reels that also increase winnings. It does offer the maximum possible multiplier of  18888x your stake. That is possibly one of the biggest multipliers for a slot game.  However this also involves activating all the features that would bring the multiplier to that number.

The game is rated as HIGH volatility and  RTP of 96.47%. Bets start from 0.05 up to 5 per spin. There is an option for autoplay that can max out 100 spins. There are 13 symbols in the game which include purple, white, blue, and red gemstones. Then we also have gold bars, bank notes, and boxed symbols (Take Prize, Roll Even, Hard Eight, Double Trouble, WIn Spin, and Full House) each having their own functions that will work in advantage with your spin.

The Game Changer feature  is activated with a combination of boxed symbols on the outer positions of the matrix. This will prompt a dice roll  for the bonus game that will let you need to move positions and acquire bonuses.

8th Wonder Game Changer seems like a very old slot format but was intentional in terms of design to create interest about the unique gameplay and interface. With also a promise of a huge multiplier jackpot, many would get curious about it and despite being very different, it indeed lives up to be the Game Changer.