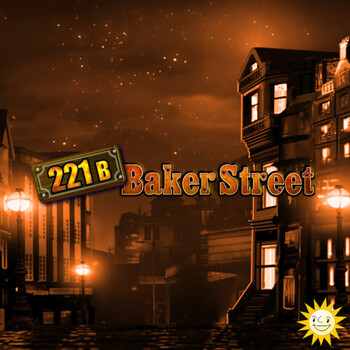 Produced by
Merkur
The famous 221B Baker Street is the setting for this Merkur Gaming video slot that is a cut above the rest. Being the first time we have played one of their games, we were rather surprised to find that this five reel, twenty pay-line game is something a little more out of the ordinary. This developer is popular in the land-based gambling game, and we suppose it was only natural that they progress online. There is a top prize of 5 x 20 000 coins on a top wager – more than enough to tantalise the highest of rollers.
If you want to play Merkur's 221B Baker Street slot, you can expect a state-of-the-art video slot. This offers many entertaining graphics and features that include wild symbols, multipliers, bonus games and free spins.

About 221B Baker Street

The 221B Baker Street game is a 5 reel, 20 payline Merkur developed video slot that sends players back into Victorian London to explore for famous murders and bring them to justice. Exploring this old city will have wilds, scatters, bonus games and free spins found. The final prize which can be won is valued at 10,000 your wager.

This game’s design is dark in its nature which creates a spooky environment. Lying behind the reels of the 221B Baker Street slot game is a dark city with old buildings seen to the right & left. Dimmed lights blur through the windows creating an ominous orange hue to the game. This slot has Sherlock Holmes, murder, the docks, the Holmes & the Murderer, a vial of blood, magnifiers, guns and themed poker suits displayed as slot symbols. These icons help take the theme to new heights of immersion.

There are two options given to punters in the 211B Baker Street online slot. Those two options being the ability to decide which paylines will be active and capacity to lower or increase the line bet. These slots wagers vary from 0.01 to 2.00 and as such means, the maximum bet is 40.00.

There are two bonus games in the 221B Baker Street slot online. The Big Ben feature which is triggered by an illustration of Big Ben shrouded in fog, where at least three of these activate the game. Three icons stars 6 free games with up to 5 x multipliers, and landing four of five of these icons allows for even more winning possibilities.

The second bonus game is triggered by the second scatter icon called - the Duel Bonus. An icon of Sherlock and the Villain armed, standing back-to-back gets the game going. It offers a three times multiplier and prize capped at 4000 coins. This slot also offers a gamble ladder after winning that makes for a gamble that is both fun and easy to win.

What is the maximum bet for 221B Baker Street?

What is the minimum bet for 221B Baker Street?

Can I play 221B Baker Street on mobile?

The 221B Baker Street can be played on mobile devices.

What is the RTP of 221B Baker Street?

What is the biggest potential win for  221B Baker Street?

221B Baker Street at Genting Casino

Play 221B Baker Street slot machine at the Genting Casino. Genting is a well-established name in the casino industry, with over 40 locations throughout the UK. The online service is now 17 years running and offers both casino and sports betting options.

Genting Casino is licensed and regulated by the UKGC and the Malta Gaming Authority.