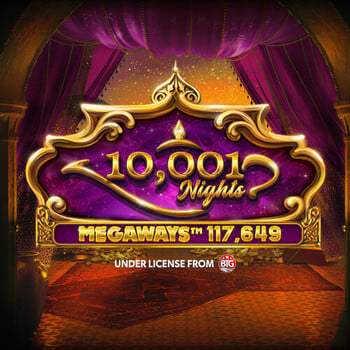 Produced by
Red Tiger
10001 Nights Megaways slot online is a 6 reel 117,649 ways to win slot machine. It is a high volatility slot which may mean stretches of non-winning spins and a chance at large wins. Bets range from 0.20 to 8 per spin, with payouts up to 10,347x your total stake. The RTP for 10001 Nights Megaways is 96% which is the market average. In terms of features, the 10001 Nights Megaways game has many to offer, so you can potentially activate Mega Wilds, Low-Paying Symbol Removal, Win Multipliers, Random Wilds and Destiny Free Spins.

The theme is quite colourful and rich in elements, as one might expect from an Arabian-themed slot, but not with nuances that are unpleasant to the eye. More gold can be seen on the screen, as well as the edges of the reels and the golden coins in the background. The red curtains with gold accents are also reminiscent of Arabian culture.

Low-value card suits are followed by higher-value shoes, pots of gold, camels, tigers, and a male character. To compensate for the vastly increased number of ways, symbol values have dropped compared to the first game, so landing a premium sic of a kind way is worth 0.8-3 times the stake. Wilds appear at various points and replace pay symbols to help form winning combinations.

Wins occur when matching symbols appear in adjacent reels (any row height is acceptable) beginning at the leftmost side of the grid matrix. When you win, the cascade feature is activated, which removes the winning symbols and allows others to fall into the empty spaces. Another cascade occurs if a new win is formed from the dropping symbols.

The four lamps are located above the reels and each one represents a feature that can be unlocked by the Oil Lamp. When you play 10001 Nights Megways you can activate the Feature Lamp when it is finished and the corresponding feature is unlocked, it will be active on the next spin and any subsequent ones at random.

The Destiny Spins feature can be triggered by three or more scatters, and it begins with eight free spins for the first three bonus symbols and another spin for each additional symbol. As you play 10001 Nights Megaways slot you can win a multiplier that starts at x1 and increases by +1 with each winning combination up to x20.

The Spin modifier, which we discussed earlier in the free spins, can be activated at any time. The multiplier from your pick is added to the win multiplier if the Multi-Pick modifier triggers or is triggered on the free spins triggered spin. With three or more scatters, the round can be retriggered.