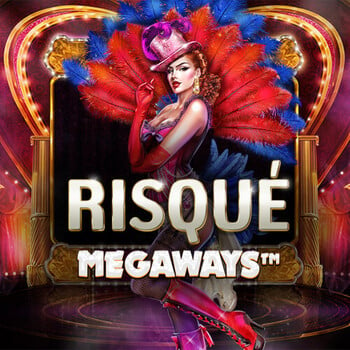 Produced by
Red Tiger
The Red Tiger Risqué Megaways slot machine is a volatile dynamic reel burlesque slot with both a top and bottom sliding reel that maximises the entire 6-reel grid to 321,489 win ways. The Risqué Megaways online slot, which can be played on any device, accepts bets ranging from 0.10 to 20 per spin. The game offers a high volatility release with a maximum win of 5,250x your stake. Fortunately, the RTP rate on the Risqué Megaways slot online is 95.73 %, which is close to the industry average.

The Risqué Megaways slot game has an immersive and glamorous design with sparkling elements that perfectly complement the theme. All of this is expertly enhanced with superior graphics that can make gameplay smoother and more clear. The reel set is constructed of golden columns with intricate designs and is placed on top of a stage. The background depicts the sparkling stage, which features a large heart in the back, red curtains, and numerous lights and spotlights. Surprisingly, the overall atmosphere harkens back to the roaring twenties, when jazz and swing were at their peak.

The first half of the paytable is made up of low-value symbols, which are represented by the four card suits as different colored crystals. The second half of the Risque Megaways game features the high-paying symbols, which include boots, a cocktail glass, a hat, a perfume bottle, and the microphone, which is worth 2x the stake for a fully covered payline. The scatter symbol is a large red heart, which can be used to activate free spins, as well as special fan symbols and wild symbols.

When you play Risque Megaways slot, you'll find a few bonus features that can help to make the game more dynamic and exciting. Creating a winning combination is just the start. Following this, a chain reaction feature occurs, in which new symbols drop and replace winning positions. The chain reactions feature will continue if new combinations are formed. One of these is the Megaways mechanic, which offers many ways to win and cascades whenever you create combinations. When fan symbols appear on the game's upper or lower bonus reels, they expand to cover an entire reel, revealing wilds or random paying symbols for your benefit. Only the Fan symbols can reveal the Wild Super Symbol, and it cannot be swapped until it appears in a winning combination. The Wild Super symbol replaces all other symbols in the game and also has a Ways multiplier of between x4 and x9. Free spin feature is triggered by landing three scatter symbols in a row. This will award you 10 free spins, with an additional free spin awarded each time a new scatter appears.

At Genting Casino, you can play Risque Megaways. The Risqué Megaways slot has fantastic visuals that perfectly capture the essence of the theme and are enhanced and complemented by the high-quality graphics. Fans of cascading Megaways slots will be excited to try Risque Megaways, which has two horizontal reels instead of the usual one. The free spins bonus gives you a lot of opportunities to make super attractive symbols and a win multiplier. The chances of winning aren't particularly high, but they're also not particularly low. Fans of the cabaret should check out Risqué Megaways.