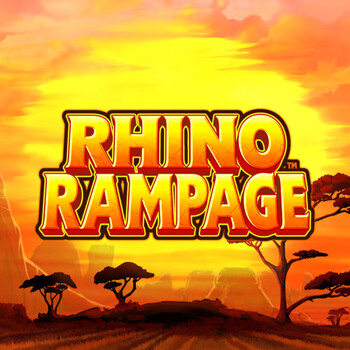 Produced by
Blue Print
Blueprint Gaming's Rhino Rampage online slot is an enthralling online slot machine. It has five reels, three rows, and twenty-five pay lines. The slot's captivating African Safari theme hooks you in. Rhino Rampage slot online can be played with stakes ranging from 0.25 to 125 per spin. The RTP of the game is 96.28%, which is above the industry average. The maximum possible win for Rhino Rampage is 25,000 times your stake. This is a high volatility slot which may mean stretches of non-winning spins and a chance at larger value wins compared to lower volatility games.

Rhino Rampage slot is set in Africa and includes a Free Spins feature in which three adjacent reels become colossal, awarding extra spins and Lightning Spins. Given the theme of the Rhino Rampage slot game, you'd expect to see a slew of animals on the paytable, and there aren't any. It begins with a collection of J-A royals, which are nicely decorated in small in-theme, tribal flourishes, and continues with premiums of meerkats, warthogs, hyenas, and leopards. When three or more matching symbols appear consecutively from the first reel on any of the 25 paylines, the player wins.

The rhino Wild can assist in creating wins. The Wild symbol can replace any regular symbol and can appear stacked to cover an entire reel of the Rhino Rampage game. In terms of rewards, five-of-a-kind premiums range in value from 6x to 16x the stake, but it's the rhino you're after. In addition to being dangerous, five of the horned beasts on a payline are worth 40 times the stake.

To keep the Rhino Rampage slot machine from becoming too repetitive, several features appear now and then to break up the flow. The first is the Lightning Spins feature, which can be triggered in two ways. The first is when 6 or more moon symbols appear in the base game, and the second is when a colossal moon symbol appears during free spins.

Regardless of how the feature is triggered, players receive three Lightning Spins with only moon symbols on the reels. If a moon symbol appears, the number of spins is reset to three. Moon symbols reveal either a cash prize or one of three fixed jackpots worth 30x, 100x, or 500x the amount wagered.

What is the maximum bet for Rhino Rampage?

The maximum bet for Rhino Rampage is 125.

What is the minimum bet for Rhino Rampage?

The minimum bet for Rhino Rampage is 0.25.

Can I play Rhino Rampage on mobile?

Yes, you can play Rhino Rampage on any android or iOS mobile device.

What is the RTP of Rhino Rampage?

What is the biggest potential win for Rhino Rampage?

The biggest potential win for Rhino Rampage is 25,000 times your stake.

Rhino Rampage is available at Genting Casino. The site holds a great variety of slots, table games, and live casino games. Visit Genting Casino online to enjoy these games wherever you are using any device. Rhino Rampage is a great game that we can easily recommend to high-rollers and penny slot fans. The maximum possible of 25,000 times your stake can easily attract many players. If you are a fan of the Safari theme then this slot is for you.