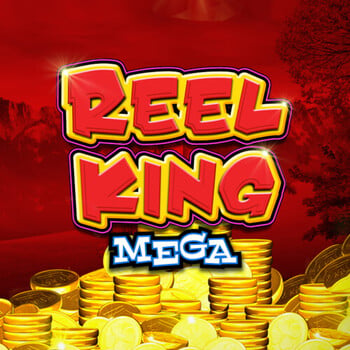 Produced by
Red Tiger
Reel King online slot is a five-reel, three-row slot machine with twenty paylines and stakes ranging from 0.20 to 200 per spin. The maximum win per spin is 500 times the amount wagered. This prize can be won by lining up all of the jackpot symbols on the reels or by activating the bonus feature. The RTP of Reel King Slot Online is 96 percent, which is the industry average. Combine this with a low variance, and you could have frequent wins with small amounts that add up quickly.

The Reel King Mega slot game is a classic arcade slot that has made the transition to the online casino world. This classic fruit machine has been a huge hit for Astra Games in brick and mortar venues, and now thanks to Red Tiger Gaming. With the symbols rearranged, you'll see lower value cherries, plums, 10's, and J's on the reels alongside more rewarding Q's, K's, and bags full of gold coins - the latter being the most rewarding, paying 25 times your stake for 5 in line. The fool's hat is the wild symbol, and it can be used to replace any other symbol. Even the Wild symbol can appear in 2x2 size. These are referred to as Super Symbols.

The King's Crown feature is a randomly triggered base game feature in Reel King Mega. When this feature is triggered, which is quite frequently, the crown on the title logo begins to bounce around on the reels, transforming symbols into wilds, including Super Symbols. Most of the time, you'll get one or two wilds, but the feature can provide you with more. The Reel King feature will produce the vast majority of the larger payouts; this bonus game is not triggered by landing three scatter symbols. Instead, it activates when all five reels are highlighted with a yellow background. When this feature is activated, up to 5 cartoon kings may appear on the reels, each with their own set of reels. The king will spin his reels, awarding you 2, 5, 10, or 25 times your bet for three of a kind mixed, blue, yellow, or red sevens. The feature will continue until a losing spin is made.

Reel King Mega is available at Genting Casino. Visit the site to enjoy an excellent variety of slots, table games, and live casino games. Genting Casino online allows you to play at the comfort of your own home using any device. Reel King Mega is a popular slot that appeals to many players. The max win of 500x your stake may not sound much but the game has great features that can be very rewarding.