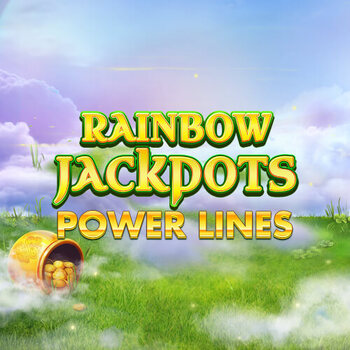 Produced by
Red Tiger
Rainbow Jackpots Power Lines is an exciting leprechaun-themed adventure where each spin may feature between 2 and 7 rows but will always feature 6 reels. The more rows, the more Power Win Lines are possible, up to a maximum of 49! An electrifying max win of 1,000x stake is possible in this vibrant and feature-rich slot.

On a lush patch of green grass sits a 6 reel slot with a blue sky, fluffy cloud and rainbow filled background. A Celtic wooden frame completes the magical setting. A traditional Irish music soundtrack together with singing birds adds to the charm. Each spin may offer between 2 and 7 rows and the reels are filled with symbols ranging from playing card suits to the leprechaun's hat, horse shoe, golden four leaf clover and Wild gold coin.

Lucky Leprechaun's Pipe reveals a SUPER BEER BONUS symbol which lands on the reels as a full screen SUPER SYMBOL. In the TRIPLE BEER BONUS the player will be awarded with the instant wins of all three glasses for a huge multiplier on the current stake.