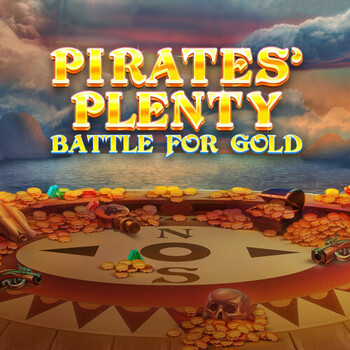 Produced by
Red Tiger
Ready for a buccaneering escapade? Pirates' Plenty: Battle for Gold slot from Red Tiger promises a marauding good time. This nautical jolly is jammed with features, from free spins and sticky wilds to a mischievous monkey ready to loot. Set on the interior of a pirate ship that's brimming with gold treasure, Pirates' Plenty Battle for Gold slot has 20 pay lines in a grid with 5 reels and 3 rows.

Once you start to play Pirates' Plenty: Battle for Gold slot online, you'll find the classic card suit depicted on coin symbols. There's also bottles of whiskey, pistols, a cannon and a pirate's hat which are the higher paying set. No pirate slot game would be complete without skull and crossbones lurking on the reels. Here the skull and crossbones symbol is the highest paying, awarding up to 30x your stake if you land 5 of a kind.

Keep your eyes peeled for the Battle Spins scatter. This bonus is activated by landing 3 scatters on the same spin. The amount of free spins given is random. Throughout this round, a bearded pirate throws bombs, and these remain sticky for the rest of the feature. They can also come with multipliers of up to 5x attached and add extra free spins to your total.

If you are looking out to play Pirates' Plenty: Battle for Gold's slot's Wild feature, the cheeky ship's monkey takes centre stage. When he appears, he clambers across the reels and steals all the lower value coins on the reels. A re-spin then follows, consisting of higher value symbols only. Each different symbol gathered by the monkey also boosts a wild multiplier. If he collected all the card symbols on the same spin, he turns into a 4x multiplier wild.

If you are aiming to play Pirates' Plenty: Battle for Gold's slot's additional bonus feature, look out for the Wild Island Row. Whenever a map symbol lands, it adds to the total above the reels. This counter pushes to ship towards its destination. Once you've collected enough map symbols and arrived, you'll open a new row. This boosts paylines from 20 up to 30. This new row remains unlocked for all future spins at that stake level.