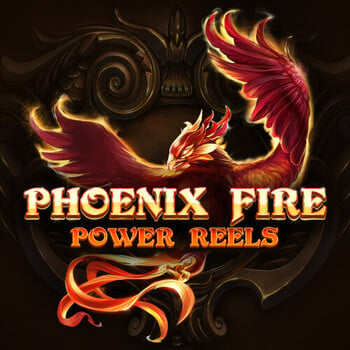 Produced by
Red Tiger
For centuries humankind has always been fascinated by the concept of a phoenix. Perhaps it is the sheer mystique, or the symbolic emblem of rebirth, that creates its alluring magnetism. Either way, in Red Tiger's Phoenix Fire Power Reels online slot you too can acquaint yourself with the stuff of legend. Phoenix Fire Power Reels is an 8-reel, 6-row and 30-payline slot. The concept is inspired from fantasy themes, with slick graphics and animations. You will notice spinning around the reels many winged symbols. These don't do anything in their own right, but they lend a magical feel to the game.

The reels are set against an ancient scroll embossed with Phoenix etchings. The lower value playing card suit symbols are a scroll, a ring and a book of spells. The best of the standard symbols is the goblet, land 8, and you will be awarded 50x your stake. The wild symbol is depicted by the golden phoenix and appears stacked 3 symbols high. Wins will be awarded anywhere on the reel set as long as three or more symbols connect on a payline.

Landing 3 or more of the free spins scatter launches the Free Spins feature. The amount of free spins up for the taking here varies. It's possible to land up to 3 standard wild symbols on any free spin. If there are winged symbols nearby, then this can lead to some substantial wild clusters with potential payouts to match. Retriggers are possible here too.

Remember those mysterious winged symbols we mentioned earlier? Well, they play a part in the Phoenix Wildfire feature. Should they land adjacent to a stacked phoenix, every winged symbol adjacent to the Wild will also turn Wild, offering huge opportunities for winning combinations. This can happen during any spin in the base game, making it potentially very frequently activated. The same feature is also triggered at random if the phoenix flies across the reels, turning every symbol wild.

The colour scheme is one of fire and flames, so expect warm orange and ochre hues augmented by the intermittent burst of a flame. There's also a well-matched ethereal audio accompaniment. When you first play Phoenix Fire Power Reels online, you will notice the sheer size of the playing grid. Sprawling across 8 reels, you're greeted with a far greater spread of symbols than usual.

Bets can be placed starting as low as 0.20, climbing up to a maximum of 40.00. The slot's biggest win of over 1,900x can be achieved during the lucrative Phoenix Wildfire feature. On top of this, the game has an RTP of 96% and is of medium to high variance.

There are so many reasons to play Phoenix Fire Reels online, from exciting features to crisp imagery. It's fast-moving, and the Wildfire feature is a unique offering. We were always told to never play with fire, but Phoenix Fire Reels is the one exception!