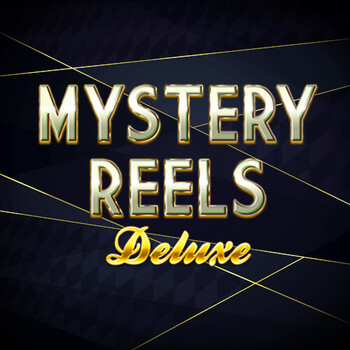 Produced by
Red Tiger
Red Tiger Gaming's Mystery Reels Deluxe slot online has 25 paylines and 5x3 reels. In the base game, you can get up to three cloning mystery symbols on the same spin. The Bonus Wheel round, which has up to 15 starting spins and four special segments, is the game's main attraction. Up to 23,084 times your bet can be won. The RTP for Mystery Reels Deluxeonline slot is 95.66% which is close to the market average. The Mystery Reels Deluxe game is friendly to beginners and penny slot fans with a betting range of 0.10 to 4.

A black wall with a few lines drawn across it and a Bonus Wheel hidden behind the reel set make up the background image. The music has a strong sense of energy. When trying to play Mystery Reels Deluxe, don't anticipate too many surprises. When you play Mystery Reels Deluxe slot the regular pay symbols consist of cherries, apples, oranges, grapes, horseshoes, stars, bells, and sevens.  A payout of 2 to 40 times the initial bet is given for lining up these icons in a winning five-of-a-kind winning line. The lack of Wild symbols in the game makes it even more distinct from sequels, which employ them to keep players entertained and stand out.

You can get up to four Mystery Symbols on any given spin, and the four premium symbols pay between 12 and 40 times your wager for wins with five of a kind. The number that each mystery symbol reveals shows how many times it will duplicate itself into new random positions. The mystery symbols reveal a randomly chosen matching symbol once the cloning is complete.

It's true that Mystery Reels Deluxe slot game has some really cool mystery symbols. They can land up to three times on a single spin, and each time they do, they reveal a number. This figure represents how many times the mysterious symbol duplicates itself in various grid locations. Each mystery symbol then reveals the identical matching symbol following the completion of the cloning process. This might be the Wheel Deluxe symbol or a pay symbol.

The Mystery Reels Deluxe slot machine is available at Genting Casino. The site holds a wide variety of slots, table games, and live casino games. Genting Casino online allows you to enjoy these titles wherever you are while using any device. Mystery Reels Deluxe may look like a conclusion to this series of slots and is a great one at that. The game offers a max win that can still interest many players with 23,084 times your stake even if the betting range is not that wide. We can easily recommend this game for beginners and players looking for a straightforward slot machine.