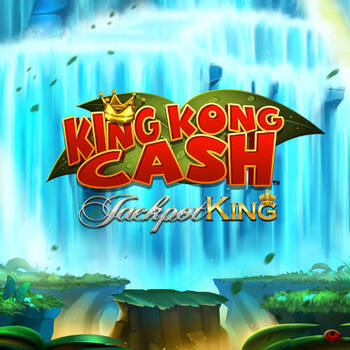 Produced by
Blue Print
King Kong Cash JPK is a game created by Blueprint Gaming that is based on King Kong, otherwise known as the king of the apes. The King Kong Cash JPK slot has a conventional 5-reel video slot with 20 paylines but stands out from other slots in this feature thanks to 9 awesome bonus features and a top reward of up to 1000x your wager in the main game, and incredible progressive pot prizes thanks to the Jackpot King feature.

Blueprints King Kong Cash JPK slot game is set in the jungle and has everything that you’d expect from this theme, from dense jungle escapes to a cast of animals which represent the majority of the symbols. Overall this is a very energetic and light-hearted slot, making it perfect for gaming on the go or fun and relaxing at the end of the day. You’ll find the following symbols in the King Kong Cash JPK game:

You’ll find King Kong fast asleep to the side of the reels. If he wakes up you’re in for a treat because you’ll be awarded one of the following modifiers:

Kong will blast bananas from a cannon in the Banana Cannon Wilds feature. These bananas transform symbols into wild symbols when they appear on the reels. Kong might have a rage fit and throw a barrel at the reels when he wakes up in the Golden Barrel Super Spin feature. The barrel will then explode, resulting in barrel symbols being strewn across the reels. Once the explosions have ended, the barrels on the reels will become a single matching symbol. Kong may whack the reels with a big hammer and trigger the King Kong Spin Streak. If he does, all winning symbols will be locked in place, and you'll be given a free respin in order to try to strengthen your winning combination. In the Bonus Boost Feature King Kong will add extra barrel scatter symbols to the reels, improving your chances of activating one of the bonus features.

Just like the free spins rounds of many slot games, all of the bonus features of the King Kong Cash JPK slot machine are triggered by landing three or more scatter symbols within a single spin. There are four bonus features which start off with the Barrel Blast feature where players will see a selection of barrels on the screen from which to choose to reveal a multiplier prize. If three golden monkeys are uncovered, they will advance to the Big Monkey Bonus feature.

The Donkey Kong Trail is a mini-game based on the video game Donkey Kong. Players have the chance to win a variety of prizes, as well as the Big Monkey Bonus. The trail will come to an explosive halt if players land a bomb icon.

Empire Free Spins will give players a new reel set, with the action taking place in front of the Empire State Building. Players must progress through the free spins levels in order to obtain greater and better prizes.

Players will be transported to a new set of reels with 40 pay lines for the Golden Kong Free Spins feature. Wilds can be collected after each spin. Players will be awarded wild super spins after completing the free spins, during which all of the wilds they collected will become active on the reels. Following each spin, you'll be presented with a selection of barrels from which to choose. If a monkey is discovered, the feature will continue, but if a bomb is revealed, it will end.

The Big Monkey Bonus is earned by collecting golden monkeys during the bonus games. Players can win up to 1,000 times their initial bet when playing this feature.

King Kong Cash JPK is part of the Jackpot King network of games meaning that there's the chance for three progressive pots to be won on any spin. These pots are called the Royal Pot, Regal Pot, and Jackpot King Prize pot. These pots will accumulate in value until one lucky winner is chosen.

Load the King Kong Cash JPK slot at Genting Casino by pressing the 'total bet' button, you can set your stake amount. To do this adjust the sliders to increase or reduce your wager until satisfied. Wagers range from a pence to hundreds of pounds, so no matter what your budget is, you should be able to locate the appropriate bet.

Once you've decided on your stake, simply press the spin button to begin spinning the reels of the King Kong Cash JPK game. Winning combos are formed when three or more matching symbols appear on the reels across an active pay line, starting from the leftmost reel. All payouts will be made in accordance with the paytable.

What is the maximum bet for King Kong Cash JPK?

What is the minimum bet for King Kong Cash JPK?

On the King Kong Cash JPK slot game you can wager as little as 20p per spin.

Can I play King Kong Cash JPK on mobile?

Yes, you can enjoy the King Kong Cash JPK slot online on any device including mobile phones and tablets.

What is the RTP of King Kong Cash JPK?

The King Kong Cash JPK online slot has a theoretical RTP (return to player) of 95.8%

What is the biggest potential win for King Kong Cash JPK?

The King Kong Cash JPK game can award up to 1,000x your wager in the base game, but as a Jackpot King slot has three progeressive pots on offer.

Since 2008, Blueprint Gaming, a game production firm located in the United Kingdom with headquarters in Newark and Malta, has been a subsidiary of the Gauselmann Group in Germany. Gauselmann is a family-oriented entertainment company whose objective is to deliver engaging games with tiny prizes for small investments. Blueprint, as part of this group, creates and distributes its own original online slot games as well as games for other companies. Blueprint Gaming's diverse portfolio guarantees that the company has a broad appeal that appeals to all types of slot fans. All types of gamers can play the games they desire while remaining confident in the fact that production quality, fairness, and entertainment value will always be assured. Blueprint Technologies Ltd is licensed by the Malta Gaming Authority and popular slot titles created by this developer include Return of Kong Megaways, Fishin Frenzy Megaways, and The Goonies JPK.

If you like the sound of what King Kong Cash JPK has to offer and want to give this game a try or countless other slot games a spin or two then come and join us at Genting Casino. At Genting we don’t just offer a great range of slots but also fantastic table games and live casino games too.