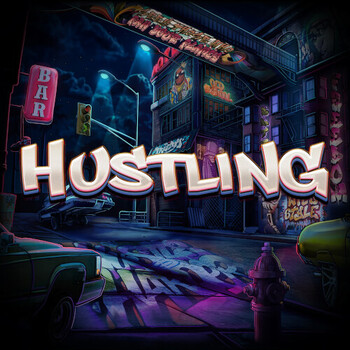 Hustling is built around a pay both ways game system that features a West Coast rapper facing off against an East Coast artiste. Offering stakes between 0.20 and 20 per spin, the action takes place on a 5-reel, 3-row grid, paying out wins when three or more matching symbols land left to right or right to left, starting from reel one or five. In total, 10 payways line the grid, effectively doubling due to the pay both ways system.

Hustling makes do with five low pay graffiti styled card royals 10-A, which are worth payouts of 0.4 to 1.2x the bet for a five of a kind win. Premium symbols on the upper side of the table consist of hats, spray cans, a ghetto blaster, some shoes, and a gold dollar sign necklace. Landing a five of a kind premium win will get you a payout of 3 to 20x your stake.

Super wild symbols replace regular pay symbols and trigger free spins. The West Wild appears only on the leftmost reel, while the East Wild, on the rightmost. When a Super Wild lands it locks for one spin. When Super Wilds land on both reels simultaneously, 10 free spins are awarded. Before they start, players pick either the West Wild or the East Wild to battle it off. Both wilds remain locked in place during the bonus round and start with a win multiplier of x1.

When free spins run to zero, if the chosen Super Wild has a higher multiplier than the non-chosen Super Wild, +10 free spins are awarded. If two multipliers are the same, +1 extra spin is awarded until one of the Super Wilds has the highest multiplier and if lower, the round ends. Should the two rappers battle each other to a standstill, the maximum winnable amount is 3,151x the bet.

Register to the Hustling to Genting Casino, playable on all mobile devices. Don't chase losses. Set your limits. Stay in control.