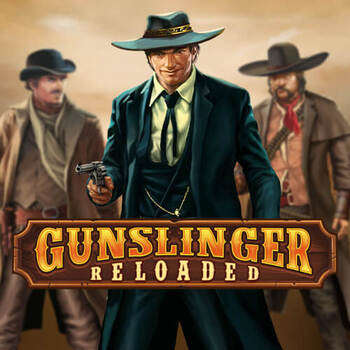 Set in the exciting Wild West, there are sights to behold, gunslingers to meet and cowboys to befriend! Chase the notorious outlaws Butch Curry, Jessie Picket and Wild Bill!

Gunslinger Reloaded is a five reel by twenty-five playline game. The symbols on the reels include A, K, Q, J, and 10 poker playing cards as well as a Sheriff with badges and guns, pans of golden nuggets and pendants showcasing a buxom beauty. The pans of golden nuggets are the most valuable symbols, giving you 40X your stake for five on a playline. The Bounty Hunter is the wild symbol which can replace other symbols on the three scatters, it has the potential to give you a massive 400X your stake for five in combination.

Finally the last feature is the Shoot the Cards feature which is played when you are able to collect each of the poker cards to form winning combinations. This feature enables every time you put a higher stake, the higher the stake the higher the reward. This progressive reward system is won if all the cards have sheriff stars on them.

Chase the outlaws in Gunslinger Reloaded on Genting Casino, which is accessible for any mobile device. Just be mindful not to exceed your gaming budget.