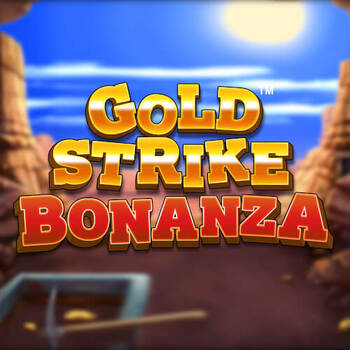 Produced by
Blue Print
Gold Strike Bonanza is a classic mining-themed slot game developed by Blueprint It has a vintage aspect to it as well, with a land-based sense to it. You will also receive a fantastic free spins bonus, which increases your chances of winning. The offered win multiplier can increase your winnings by up to tenfold. It is not necessary to have any prior experience to get started. As a result, you can easily begin playing Gold Strike Bonanza Online on your smartphone, tablet, or computer. Read this Gold Strike Bonanza Online Slot review until the end for more information before travelling to this gold mine country.

Gold Strike Bonanza has decent symbol values that keep the action going until three or more dynamite scatter symbols appear, triggering free spins. When three, four, or five Scatters appear, you will be awarded 10, 15, or 20 free spins. The prospector symbol appears during free spins. Because the prospector is a Wild symbol, it can be used to help complete winning combinations. Perhaps more crucially, the prospector's method of collecting gold nugget symbols. Gold nugget symbols have a cash value of 2 to 2,000 times the bet when they land. If any are visible at the same time as a Prospector symbol, the player is awarded all of the cash rewards. When a Prospector symbol lands on the reels, it is added to a metre that runs along the top of the screen. If you collect enough of them, you'll get more free spins and multipliers. Here are the multipliers and awards:

Gold Strike Bonanza slot machine is one of the many games available at Genting Casino. It can pay off up to 250,000 times the amount you wager. You may play a range of table games and live casino games on the site, which features a user-friendly interface. There is a game for every discerning slot player, ranging from basic games to video slots with a variety of bonuses and features. Play Gold Strike Bonanza slot online today on your desktop, Android or iOS smartphone.