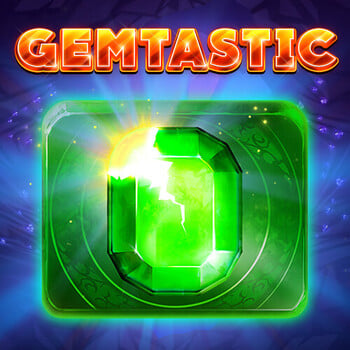 Produced by
Red Tiger
With Gemtastic, you get the chance to go on a mining adventure to discover loads of colourful gems. Thanks to the chain reaction themed gameplay available here, winning streaks can award up to a 15x Lava Multiplier. The Gems Magic Flow is another nifty add-on where selected symbols automatically turn into Wilds when they take part in a win. An abundance of gemstones makes Gemtastic slot this an eye-catching game. To top it off, players stand a chance to rake in 10,000x their wager in this highly volatile game. 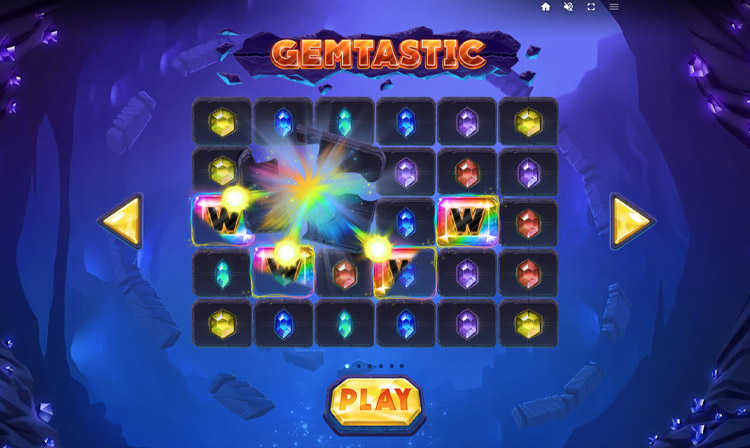 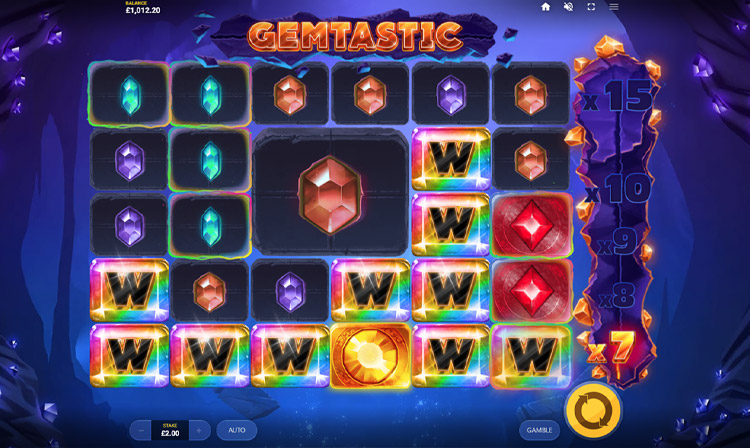 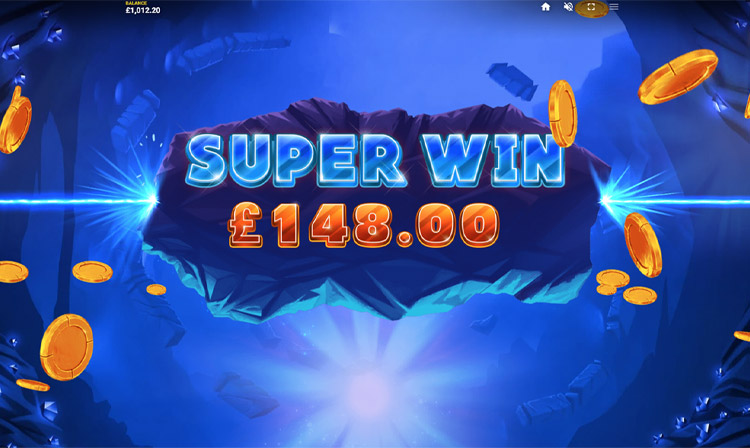 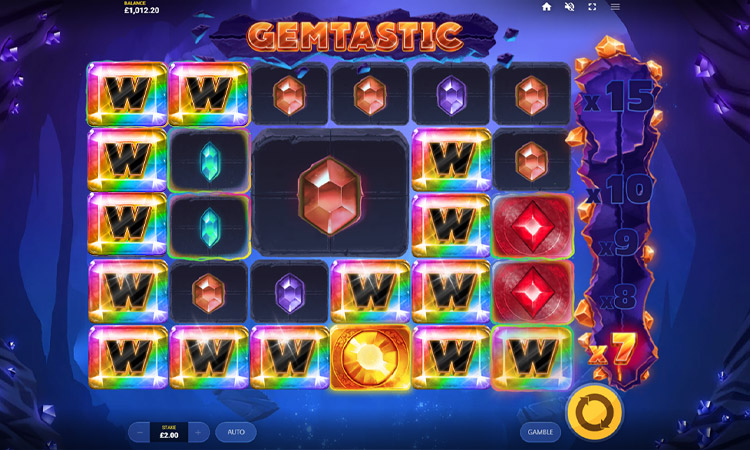 Released in 2019 by top software provider Red Tiger Gaming, Gemtastic slot features 5 rows, six reels, and 30 paylines. It’s a high variance game and sports a Return to Player (RTP) value of 96.07%. Coming to the gameplay aspect, the icons you get to see across the reels are gemstones. There are a total of 9 different precious stones in varying colours and sizes. A tenth symbol - a rainbow-like gem with W - acts as the Wild.

Since Gemtastic is a chain reaction game, symbols in a winning combination give way for newer ones. For every consecutive win, the multiplier value is set to change by 1x. On a streak, you can get your wager multiplied by up to 15x.

The overall appearance of the game is attractive. Although the graphics are simplistic, the design depicts the theme pretty well. There’s a screen full of gem icons and the reels are set on a background that looks like a mining well. The sounds are unobtrusive and only go up tempo when winning combos are made.

Here are the bonus features attached to Gemtastic slot game and what they offer.

The Wild symbol on the Gemtastic game comes in a rainbow colour with a huge "W" written on its stone. Just like the common attribute of Wilds on other pokies, the Wild here effectively exchanges all the symbols across the 30 paylines available on Gemtastic. Landing this icon up to six times across the reels can grant you a massive payout of 1500x your stake.

This multiplier is located at the right corner of the gaming screen and increases each time you make a winning combination. Starting from x2, the maximum multiplier value at Gemtastic is capped at x15. Here, the goal is pretty understandable - the more multipliers you have, the more your winning number increases.

With the Magic Glow feature, gems landing on the reels randomly become shiny (more than usual). When on a win line, they automatically transform into Wilds.

When the Mega Gems feature is activated, you'll see 2×2 or 3×3 colossal symbols. These icons come into play during the Magic Glow to give off some coin wins. 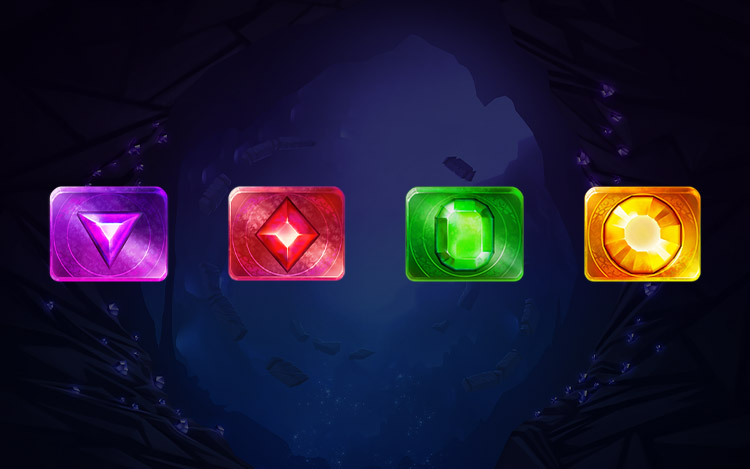 How to Play Gemtastic Slot Online

Playing Gemtastic online slot is straightforward and only requires you to place your bet. Clicking on the "Stake" icon at the bottom left corner, you can select how much you'd like to place on every spin. The minimum and maximum bet values are set at £0.20 & £10, respectively, and there's an "Autoplay" button available on the control panel. Here, you can play up to 100 spins hands-free. It’s also possible to apply loss and win limits in the advanced settings.

On Gemtastic, landing three or more gemstones results in a win. With the Lava Multiplier and Magic Glow features, you have more opportunities to get lucky and win. However, as the Gemtastic game is highly volatile, winning chances are far between. Since this game is available in "Demo" mode, you can also opt to play for free and enjoy the pure entertainment that Gemtastic has to offer.

What Is the Maximum Bet for Gemtastic?

What Is the Minimum Bet for Gemtastic?

The minimum bet of the Gemtastic game is £0.10.

Can I Play Gemtastic on Mobile?

Yes, Gemtastic is compatible with iOS and Android smartphones and tablets.

What Is the RTP of Gemtastic?

The theoretical Return to Player of Gemtastic is 96.07%.

What Is the Biggest Potential Win of Gemtastic?

Players can get up to 10,000x times their stake on Gemstatic.

Our team has a strong track record in casino game creation in Europe and Asia. Founded in 2014 by a group of industry veterans, Red Tiger Gaming portray themselves as 'Living and Breathing' all things slots; this is obvious considering this company already has a portfolio of around 200 titles. Red Tiger is a staunch supporter of regulated markets. Our products are certified in a variety of jurisdictions, and we are constantly expanding our licence portfolio. The UK Gambling Commission, Malta Gaming Authority, Alderney Gambling Control Commission, and the HM Government of Gibraltar all regulate Red Tiger Gaming. Many of the most popular online slot games have been created by Red Tiger Gaming such as Well Of Wilds MegaWays, Dragon's Luck Power Reels, and Dynamite Riches.

In case you'd like to get your shovels ready and mine for gemstones, Genting Casino is one iGaming destination where you can bring that dream to live by playing Gemtastic. The casino has a range of other popular slots. Also, if you'd like to try your hands on table games and live casino games, Genting Casino has you covered with the top titles from leading software providers.