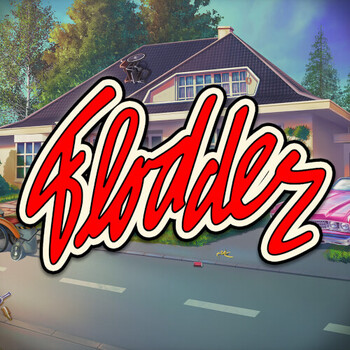 Produced by
Red Tiger
Red Tiger Gaming's Flodder slot machine has 5 reels, 3 rows, and 25 fixed paylines. The Flodder online slot is based on the hit film about the antics of the antisocial Flodder family as they go about their daily lives in a posh suburban neighbourhood. Stakes range from 0.10 to 10 per spin and can be played on any device. The RTP for the Flodder slot online is 95.75%, with a high level of volatility. The maximum payout for this slot is 7,564 times your stake.

The Flodder slot game is a branded title based on the Flodder Dutch comedy film. It features a dysfunctional family theme. It follows a dysfunctional, anti-social family as they relocate to a wealthy neighbourhood as part of a social experiment. The Flodder family is unable to adjust to their new surroundings, resulting in chaos.

It has animated graphics and is set outside a nice house with a pink Cadillac parked in front. There is no soundtrack in the traditional sense. A, K, Q, J, and 10 royals are among the symbols, as are a dog named Whiskey and members of the Flodder family. Zoon Kees, Dochter Kees, Johnnie, and Grandma are among the characters you'll meet. Grandma is the most valuable symbol, paying out 1, 11 or 50 times your total stake when three, four, or five appear on a payline.

There are four wild symbols in the Flodder game. First, there's the Grandpa stick wild, which can be used to replace any of the symbols listed above. During the free spins, you'll encounter Grandma, Johnnie wilds, and Sjakie wilds. The Free Spins scatter is a pink Cadillac symbol.

There are several Wilds in the game, and they all substitute for all other paying symbols to help form winning combinations. Grandpa Flodder will occasionally pass by, waving his stick and leaving random Wild symbols in the grid.

A pink cadillac can appear anywhere on the reels during Free Spins. Getting at least three symbols on the same spin will start the game and give you 10 spins and three picks in the Free Spins Picker round, with each additional Free Spins symbol giving you one more pick.

Pick one of 20 bottles in the Picker round to reveal one of the Free Spins modifiers. Bonus Spins, Wins Multiplier, Wild Reels, Wild Johnnie, or Wild Ma Flodder can all be found in the bottles. Win Multipliers can go up to x8 for all wins in the bonus round if the modifier is won in the picker round. If the modifier is won, up to 2 Sjakie Wilds in 1x3 size will be awarded.

At Genting Casino, you can play the Flodder slot. The site offers a great selection of slots, table games and live casino games. Visit Genting Casino to play Flodder slot and many other titles. The artwork style of the Flodder slot machine is very unique, combining two different visual styles, the animations style and artistic flair. To understand the slot, players don't need to watch any of the films or TV shows because the gist of what's going on is simple to grasp. If you enjoy the Flodder, you should definitely try this slot.