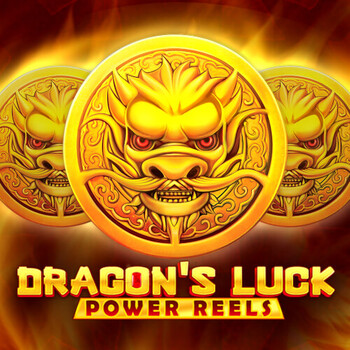 Produced by
Red Tiger
Dragon's Luck Power Reels slot online is an innovative take on the popular Chinese-themed slot. Dragon's Luck is a 10-reel slot with 30 paylines. There are no special features, but the transforming symbols keep things interesting. Play from 0.20 to 20 per spin which is . The RTP for Dragons Luck Power Reels slot is 96.10 percent, which is market average with medium volatility, implying a good frequency of low-value wins and some rare large ones. The maximum possible payout is 3,888 times your stake.

The Dragon's Luck Power Reels game is filled with beautiful traditional Chinese artwork. It's set on a mountain in fall, with hints of a hazy forest behind the massive rocks and red and gold leaves scattered on the ground.

The reels themselves resemble a hidden temple guarded by two exquisitely sculpted stone dragons. These dragons aren't just for show: they come to life at random throughout the game to breathe fire over the reels and improve outcomes. Lower-paying symbols, including the basic 10 to A playing card symbols that frequent slot players are familiar with, are carefully rendered in a Chinese style.

The higher-paying symbols are represented by traditional Chinese lucky symbols, which should bring good fortune to players when matching symbols align, such as the Lotus Flower, Golden Fish, and Doll. The number 138 is thought to be particularly auspicious, bringing wealth and prosperity. This has undoubtedly been exploited by Red Tiger Gaming in their slot, since the 138 symbol gives the most lucrative benefits, with the possibility to earn up to 3,888x your wager when matching these symbols on a payline.

There are no Scatters, bonus rounds, Wild symbols, or multipliers in Dragons Luck Power Reels slot machine. Based on this, it's easy to think the game won't be exciting, but thanks to the adjacent pays format and play across 10 reels, this game definitely offers something different for slot players who are tired of the same old slots with dragons in them.

The most thrilling feature in the Dragon’s Luck Power Reels slot game occurs at random, when the two stone dragons guarding the temple that serves as the reels come to life and bellow fire across the reels, transforming any golden dragon coins into new symbols. This can provide the opportunity to win even more large sums and is also beautifully animated.

Dragon’s Luck Power Reels are playable at Genting Casino, visit the site and enjoy a wide selection of slots, table games, and live casino games. Genting Casino online allows you to play wherever you are using any device. Dragon’s Luck Power Reels is a great game for beginners and long-time players as it is easy to learn. If you are a fan of games that are simple and enjoy spin after spin then this is for you.