Play Clash of the Beasts 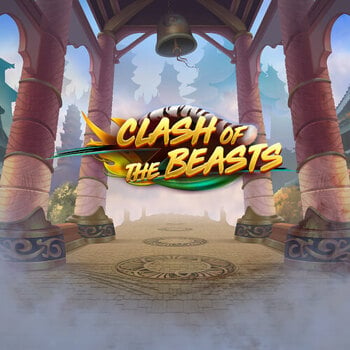 Get ready to be involved with a roaring white tiger on one side and a coiling dragon to the other, the Clash of the Beasts slot machine reels are enclosed in an ornate frame. Traditional symbols like jars, bamboo, and lucky coins are used in this Asian-themed slot machine. A tiger fur and dragon scale Ying Yang emblem are also included, along with fashionable playing card symbols.

Tigers and dragons battle across the Clash of the Beasts on the reels of the online slot machine. The two free game rounds in this outstanding game include symbol swaps or nudges. The beasts can combine their powers to gain the biggest win. Ten Dragon Spin free games are given when two dragon claws appear on the Clash of the Beasts slot machine game reels. 15 spins are started by landing three claws. An animated dragon can move the reels up or down during this round to complete the largest wins. Two or three tiger claws, respectively, grant you ten or fifteen Tiger free spins. In this round, the tiger can rearrange symbols for guaranteed wins.

Play the Clash of the Beasts slot machine online to activate the Clash Spins feature if both types of claws land simultaneously. Ten spins are given for two trigger symbols, and five more spins are added for each additional claw, up to a total of 30 free spins. All of the featured symbols are traditional Asian emblems, and the coin values frequently feature the number 8, which is considered lucky in Chinese culture. Brush-stroked 10-A royals are listed from low to high, followed by the premiums, which are made up of four different cultural things. The value of the subsequent lot ranges from 3.2-9.7 times the bet for six of a kind.

Set a spending limit for gaming and sign up at Clash of the Beast at Genting Casino and play this six-reel, forty-line game on computers or mobile devices.