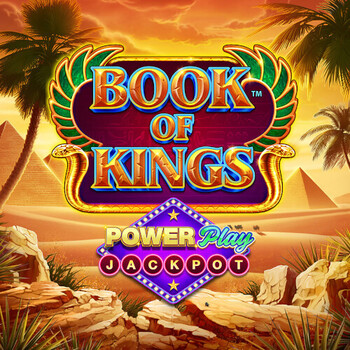 Go back to the land of Egypt and open up to the wonders with the Book of Kings. The game is made by Playtech and developed with the designs of the pyramids, palm trees, and the desert as the background,  as it stays true to the Ancient Egypt theme which is popular with the slot games.

The game has 5 reels and 10 payline and bets start at 0.1 and can reach up to 500 . With symbols such as the A, 10, J, K, and Q for lower values, you will also see high value symbols such as Female adventurer, Tutankhamen, Horus, and the Eye of Ra.

The reward is 10 free spins yet the book and the snake symbol has a higher multiplier of the stake. Which can reach up to 3x the amount. There is also a chance that it can retrigger the feature which can get 10 more free spins.

There is also the Turbo Mode which speeds up the spin time, plus the Autoplay function allows you to set automatic spin play from 5 and 100 spins. You can also opt to stop the Autoplay when you trigger the Free Games feature.

Book of Kings is considered to be a highly volatile slot, with winnings that can reach up ro 5000x the stake, and with the best luck can get bigger with the free spin feature that can push the winnings up to 15,000x the stake with the 3x multiplier. It also has a high RTP of  96.63% which is much better than the average.