Play Age of the Gods Medusa and Monsters 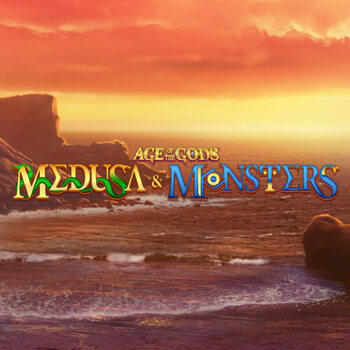 Explore the world of Greek mythology in Playtech's slot game series, Age of the Gods. The Age of Gods: Medusa and Monster slots is one of the recent installments in the series. Same as the other versions, the game is also equipped with four pooled continuous jackpots. This includes the Power, Extra Power, Super Power, and Ultimate Power. Players are introduced to a Gorgon with dangerous living snakes in place of hair. The Gorgon reigns high reel set with six reels, six to seven rows, and 164 fixed pay lines. Age of the Gods: Medusa and Monsters is a medium-variance slot game with a betting range of 0.50 to 2,000. The game's RTP is at 96.09%. The game is playable on desktop, mobile, and tablet devices across all OS platforms.

This version of the Age of the God series has a lot of features. The game pays for a six-of-a-kind range from 0.5x to 3x your bet. The base game's maximum pay is a full screen of Aphrodite symbols with 492x the stake. Getting scatters on reels two, four, or six in one spin will trigger Medusa's Gaze bonus feature. The game shows three war shields that the player can pick from to reveal one of the three premium symbols. This round ends once the Medusa wild reaches reel one. The game's jackpot round can be triggered on any spin. A 20-coin grid will be shown and the goal is to find three matching jackpot symbols in the round. Entering this bonus round gives the player a chance to win one of the four jackpots. This includes six-figure sums appearing regularly in the top-tier jackpot. Are you ready to battle the snake-haired Gorgon in the reels? Play Age of the Gods: Medusa and Monster slots today.