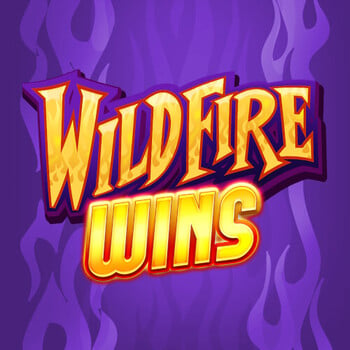 Produced by
Just For The Win
The Wildfire Wins slot game is a classic-themed slot that provides a maximum win of an incredible 10,000x the stake. The name gives you a pretty decent idea of what to expect, which is a lot of wilds, a lot of flames, and maybe a few wins if you’re lucky. Play Wildfire Winds and be ready for respins with sticky wilds and multipliers while you wait for the main money wheel feature to activate.

Wildfire Wins game from the developers Just For The Win is all about three big wheels and respins helping players reach the maximum win of 10,000X your stake. Playing on 5-reels with 50 paylines, this high volatility slot takes no prisoners when it comes to fiery gameplay.

The Wildfire Wins slot online is designed in a simplistic way but done tastefully so. In the background, there is a red background paired with flames rising up and three wheels hidden behind the reels.

As for the reels themselves, they are black and filled with traditional symbols such as bells, horseshoes and diamonds. Thankfully, the music is incredibly funky and cool that you cannot help but love it.

To the right of the reels of the Wildfire Wins online slot, there is the spin button and bet level. On this side of the screen, there is also a paytable and additional menu settings in case you need it.

Wildfire Wins slot machine starts off with a respectable RTP of 96.10% which is just over the average acceptable standard. There is also a high volatility level in this slot leading to larger wins but less often.

The Wildfire Wheels are triggered when three bonus symbols land in a single spin during the base game. As the name implies, the wheels are plural, with each one made up of eight different segments.

On the first two wheels, seven segments feature cash prizes, while the eight segment acts as an upgrade that can promote you to the next Wildfire Wheel. If you make it to the third Wheel, the eight segments are made up of prizes – and one Grand Prize, too.

Once you’ve hit a segment, that prize will be awarded, and the segment will now turn into a collect segment. If you hit a collect segment in a subsequent spin of the wheel, it will mean the feature ends.

In this slot, every royal symbol also has a fiery version. Play Wildfire Wins slot and put together a winning combination that includes one of those symbols, you’ll trigger the Wildfire Respins.

Here, any fiery symbols that are part of a win will become sticky wilds, and if you land a win made up entirely of fiery royal symbols, you’ll trigger a final respin – this time with a random multiplier of as much as 10X.

Genting casino is the best place to play Wildfire Wins. There are hundreds of games at this site with both similar and different gameplays and themes ready to be played anytime and anywhere for all types of players.