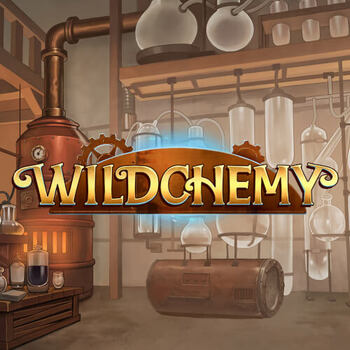 Take a trip down a post-medieval chemistry laboratory as you spin the reels of Wilchemy! Trailing back to the exquisitely pictured era of ancient chemistry and surprise-filled magic portals, this game guarantees an extraordinary slot adventure to its players.

Set on a default 5x5 gaming grid on top of a theme-fitting laboratory backdrop, the reels are surrounded by a frame of pipes that channel the bonus potion from the reels to the collecting flasks on the right. Wilchemy is playable for as low as 0.10 to a maximum of 100 coins with medium volatility and an RTP of 96.02%.

In return, experimenting with the wide array of potions and game modifiers that can be unlocked through the magic portals, tumbling reels, and exploding scatters can accumulate a win of up to 500x the stake. On the other hand, players can collect wins worth 2x to 50x the wager for three to five of a kind on the base game. Forming a winning set triggers the continuous drop of new symbols into place until no new matches occur.

Leaning on to the chemistry theme, the low pay symbols include medieval chemistry scales, amulets, old chemical compactors, and mortal grinders followed by a series of flasks containing blue, green, white, red, and yellow potions. Meanwhile, the top-paying symbols are the scientist and the Wild symbol. Wilds can substitute for all symbols except the scatter which can be seen on all reels as a flask holding a pink potion.

Located on the opposing sides of the slot, swirling magic portals can turn all symbols into Wilds if the symbols landing the two portals match. This mechanic may also be triggered after each cascade within a single spin sequence, making the game more exciting with increased win ways.

Experience these exhilarating slot features and more by registering to Wildchemy on Genting Casino. Keep in mind to set a gaming budget and only play within a reasonable limit.