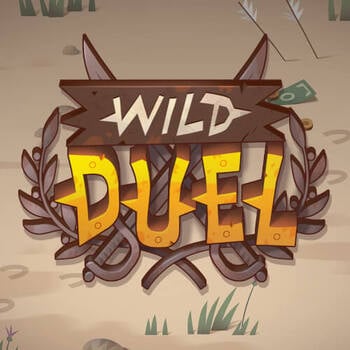 Produced by
Yggdrasil
The Wild Duel slot machine has ten fixed paylines on which you can land winning combinations, and they are spread out over a fairly basic layout of three rows and five reels. In order for a win to occur, you will need to land at least 3 matching symbols across those paylines, starting from the first reel on the left. It offers a possible max win of 10,000x your stake. Learn more about the game, its features, and bonuses in our Wild Duel Online Slot review.

When you play Wild Duel Slot, the betting mechanism allows you to choose a bet between 0.10 and 50 per spin for a chance to win the maximum possible payoff of 10,000x your stake. As previously stated, the Wild Duel Game maximum win potential is capped at 10,000x the stake. It's linked with a highly volatile model that includes limited but valuable rewards, with a potential RTP of 96.10 percent. The Wild Duel slot online has superb graphics, which is to be expected from a firm of this caliber, but it also features Peter & Sons' distinctive animation model.

The reels' design is also highly unusual and out of the ordinary. The reels are theoretically visible from above, with a distinct building on top and below them.

The reels themselves are situated in the middle of a town's street, with various armed people on either side, ready for a fight. Additionally, there is fantastic western music to keep you occupied.

This feature is triggered by landing 2 Scatters at the same time. This will result in the addition of two extra reels on either side of the original grid, of which the left one is called Marshal Reel, while the right one is called Outlaw Reel.

You will also get one respin, during which the Marshal and Outlaw Reels can be filled with either characters or blanks. The marshal characters can activate random Wilds, expanding Wilds, or sticky Wilds, while the outlaw characters come with a specified multiplier.

This feature can be triggered at any time during the base game after an unsuccessful spin, in which case three wilds are placed on the reels at random and can be used to build winning combos.