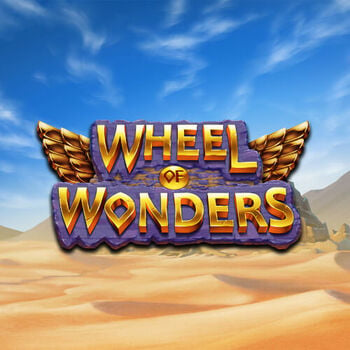 Take on the exotic route in slot game playing and head further east into the historical kingdom of Mesopotamia. Derived from a Greek word meaning "between rivers", referring to the Tigris and Euphrates. The Mesopotamians invented writing and recorded laws all the while coming up with the world's first heroes. Their art and architecture took on the raw potency of nature and it could do for culture, modern or ancient. This land sets up the premise for Push Gaming's slot game, Wheel of Wonders. To make it better, the slot game has potent and high reward wins with high volatility and a Return to Player value of 96.50%.

By putting in a lot of time and effort, Push Gaming has produced a clearly exceptional slot game. The slot grid is set in an initial 6x3 size and is placed in the middle of the desert. Shrouded by a hot hazed background reveals a sight of ruins, sand, palm trees, and a temple-like structure. The studio developers even created detailed visual effects from the background to spin animations. There is a lot to unravel while waiting for bonuses. Wheels of Wonder also has a great soundtrack to accompany its visuals to create a total package of a slot to enjoy.

If that weren't enough, Push Gaming finishes the offerings with a hefty amount of bonus features. The Wheel of Wonders feature is triggered when all additional positions have been added to the reels. The feature has three levels that depend on whether a player has an Ancient Wheel stored then after a win multiplier is given. Once the feature is activated, players get to have 5 free spins and a win multiplier. Take over the wonders of old civilizations and discover rewards in every spin of the wheel. Play now.