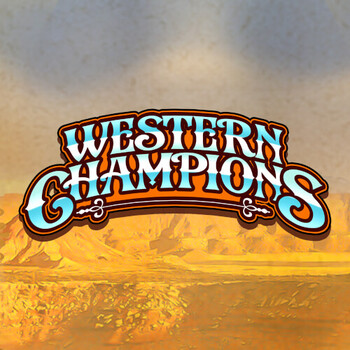 Saddle up as you’re in for a thrill-ride in Western Champions slot. Enjoy action-packed features from gunslinging, lasso spinning, and burlesque dancing which give you more chances to win incredible payouts.  Shoot your way to the maximum prize 25,000 coins for a single round.  Rustle up some wins at the  rodeo by placing a bet from 40 to 4,000.

There are five reels and 40 paylines at play, where winning lines are created matching symbols on adjacent reels, starting from the leftmost reel.  Coming from the rear are the card symbols followed by   the gunslinger in green, the knife thrower in purple, and the blue burlesque dancer which each reward from 50 to 100 coins for 5 of a kind. The two highest winning symbols are the red and gold ringleader, and the gold and blue sharpshooter. Landing 3, 4, or 5 sharpshooters delivers 20, 100, or 500 coins while ringleader brings in a massive 30, 150, or 750 coins.

The “Reveal a Wheel” multiplier feature is activated by landing special coloured symbols. Winning combinations in this feature can be formed on reel 2 or 4. Both reels can be triggered in one spin, but one will play out before the other and both multipliers will be added together. The triggering reel will then transform into the Reveal-a-Wheel, which is stacked with multipliers between 2x and 100x. The wheel spins only once and when it stops, a multiplier will be revealed which is applied to your initial stake.  Lasso in 7 free spins when scatter symbols appear on reels 2, 4 and 4.  The same play lines that triggered the bonus rounds are used while in this mode.  After the final spin is complete, all winnings are awarded.

If you’re up for an exciting gameplay with all the thrills that come with the Wild West, check out Western Champions on Genting Casino, playable on all devices. Remember