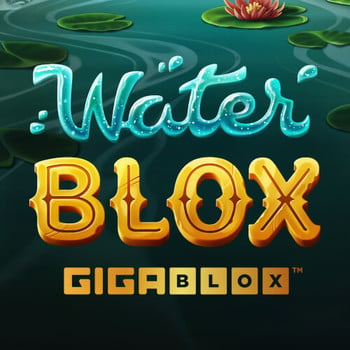 Produced by
Yggdrasil
Be transported to the world of the WaterBlox Gigablox online slot game set in the forests of Walarya and meet huge sea creatures as they travel up the fjords as the Shaman waits atop the waterfall. This 6 reel video slot game from Peter & Sons uses the Gigablox mechanic and features beautiful visuals, retentive gameplay, as well as a big win potential of up to 7500x your bet. Keep on reading our review to learn more about the WaterBlox Gigablox slot game!

Peter & Sons’ crafted the WaterBlox Gigablox slot machine to be built with the Gigablox feature. This mystical and magical game is played on 6 reels and 6 rows with 50 paylines. Playable with a bet ranging from 0.20 to 50 per spin, this highly volatile slot game has an RTP of 94%. As you spin the reels of the WaterBlox Gigablox game, you have a chance to win the game’s max win of up to 7,500x your stake.

The high-paying symbols you can encounter on the reels as you play WaterBlox Gigablox are represented by the various sea creatures you can find in the forests of Walarya. These are frogs, pufferfish, purple fishes, and an octopus. These can give payouts worth 2x to 10x your stake for six on a payline. The lower-paying symbols are represented by tiles featuring the four card suits which can get you prizes of 0.8x your bet for six matching symbols on a payline. The angry gold-coloured fish represents the Wild symbols of the game which can substitute for all symbols to help create winning combinations.

The WaterBlox Gigablox slot online also has some bonus features that are sure to keep you spinning. The most notable is the Gigablox feature which causes oversized symbols to appear on the reels in 2x2 to 6x6 sizes. These may appear on any reel. Other features of the game include Wild Re-spins, Monster Free Spin, and a Buy Bonus feature.

Randomly, during the base game, 1 to 3 symbols will be transformed to Wild symbols. After any wins are awarded, the reels will respin and the Wild will move across the reels and change their positions. The size of the symbols that were transformed determine the number of roaming wilds. During these respins, if any of the WIlds land on an oversized symbol, they will turn the entire block of symbols into Wilds. Roaming Wilds cannot land on the same position.

You can also buy the Free Spins feature with your choice of bet. You can randomly get 5 to 20 free spins.