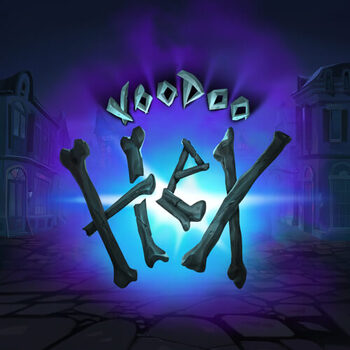 Produced by
Yggdrasil
Voodoo Hex slot, a medium to high volatility dark magic slot machine by Peter & Sons, with 5 paylines and 3x3 reels. You frequently receive the Mystery Stacks Respins feature, which has a progressive win multiplier. Additionally, the bonus round, in which the multiplier never refreshes, can be extended using this function. Your stake can be multiplied by up to 9,800. The Voodoo Hex game has a 94 percent player return rate. Play Voodoo Hex can be played for as little as 0.10 to 50 per spin.

The Voodoo Hex slot game, presented to us by Peter & Sons, adopts a fairly straightforward strategy when it comes to the game's setup. You get to spin a 3x3 grid, where wins are made by landing matching symbols from left to right across 5 paylines.

The game also includes a good betting range with possibilities between 0.10 and 50 per spin, allowing most sorts of players to select a choice that suits them.

The Voodoo Hex slot online has the distinctive visual aesthetic that fans of Peter & Sons will immediately recognize. You may expect to see inflated figures and artwork with crisp, almost caricature-like style, as well as excellent graphics.

The reels are placed on a kiosk in the midst of New Orleans, and they blend in seamlessly with the atmosphere. Buildings and cobblestone streets may be seen on each side of the screen in the pitch-black, foggy night. The totems, animal skulls, and other voodoo-related decorations on the reels undoubtedly set the mood.

There are card symbols depicting a moon, eyes, bones, and potions in the low-value category. A voodoo doll, a shrunken head, a snake, and a voodoo priestess make up the high-paying group of symbols, which can pay out 5x the wager for a full payline.

Additionally, the Voodoo Hex has wild and scatter symbols that each have a special manner of enhancing gameplay.

The game is designed with significant volatility and potentially rare, but extremely lucrative rewards. Additionally, it comes with a very appropriate maximum win possibility of up to 9,400 times the wager.

The Voodoo Hex RTP maximum is set at 96.30 percent, which is significantly higher than the industry standard.

Amazing extra features in Voodoo Hex online slot will keep you afloat. The yellow elixir Wild substitutes for pay symbols to assist complete winnings. The premium symbols pay between 1 and 2.5 times your stake for three of a kind wins. The highest paying symbol in the group is the wild, which pays out 5 times your wager for three of a kind on a payline. Additionally, coin symbols, which may payout up to 100 times your initial bet on each coin, can be landed.

When two reels have the same sort of symbol, the Mystery Stacks Respins feature is triggered. All occurrences of the symbol type become Mystery Symbols as a result, and these change into random matching symbols with each respin.

By the way, the respins are unpaid spins, and they involve the mysterious symbols moving down the grid one position at a time till they vanish off the bottom. Every respin sees a +1 increase in the Progressive Multiplier, which boosts any wins made during the feature. Once there are no longer any mystery symbols, the respins are over.

You enter the Bonus Round when you land a scatter (a skull with golden teeth) in the middle of the reels. You then receive a random number of free spins (5, 7, 9 or 11, to be precise). The bonus round's respins round is a possibility, and respins don't reduce the number of free spins awarded. Every spin and respin increases the progressive win multiplier by one, and it never resets.

Voodoo Hex slot machine is undoubtedly a compact but powerful reel configuration. This game developer has again built a wonderfully detailed scene with a creepy theme that is very evocative. Solid wholeness in game design, a darkly humorous theme, and solid wholeness in game creation are all traits of Peter & Sons' games. There are a few, but enticing, features that one can appreciate. Play Voodoo Hex and win.