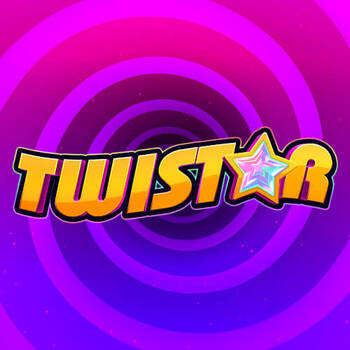 Come inside the fascinating wonderland of hidden treasures in Twistar.  Pick up wins as you collect precious gemstones and spin your way to Sticky Expanding Wild Respins feature where payouts can reach a maximum potential of a massive 12,500x your stake.  Play on all devices with a bet starting from 0.20 to 20 per spin.

The game plays out on a 6-reel, 6-row panel producing 40 ways to play on each spin. The paytable consists of five jewels alongside lucky sevens and bars. Winning combinations are formed by matching at least 3 symbols on a payline starting from the leftmost reel.  Landing six identical jewels are worth from 1.5x to 3.75x the stake.  Sevens and bars award bigger payouts from 5.25x to 10x the bet for six.  All symbols land stacked and can cover entire reels delivering bigger payouts.  Fill up the grid with the same symbols to boost the bet multiplier of up to 400x the stake.  Wild symbols step in for any other standard symbols. It also triggers the Respins feature awarding one respin at start. While the Respins feature is in play, wilds move to reels 3, 2, and 1 and remain locked in place for the rest of the round.  Multiple expanding wilds can be twisted at once, and when a new wild appears, it awards one more respin, up to a maximum of 9.  To top it off, expanded Wild symbols that land onto existing wilds increases the multiplier by +1. All multipliers on a winning line are added together dishing out generous payouts.

Keep an eye out for mystery symbols. Landing one in view lights one of 6 segments.  When all 6 segments are lit, all mystery symbols transform into one randomly chosen regular symbol.  They also stay lit for the duration of the respins feature.

Register to Twistar at Genting Casino to start spinning. Always set a budget if you are playing for real money. Don’t chase losses and  make sure to stop when you’ve reached your limit.