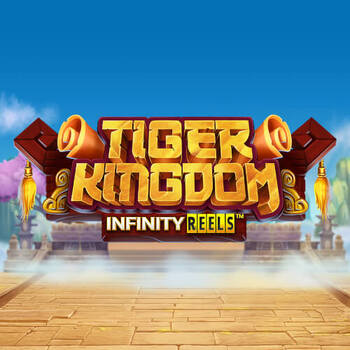 Ready to roar into riches? Then Tiger Kingdom Infinity Reels might be the best online slot game for you! Made by Relax Gaming that does bring favorite elements of their different slots into a slot game that also incorporates the Infinity Reels feature. This feature has been seen in many other slot games yet only certain games would get this depending on the quality and gameplay.

It might have the common design and gameplay of many slot games out there, they went ahead to level up the classic game which is composed of a 3x3 panel and cleverly designed with an ornate setting with an Asian theme inspiration overall.

Basically to play, the goal at least is to land at least 3 matching symbols of the game board and make a winning combination that depends on the types of symbols that also differ from low and high value symbols.

Tiger Kingdom Infinity Reels is governed by a highly volatile math model, turning out an RTP value of 96.23%. Bet starts at 0.10 up to 50 per spin. Watch out also for special features and free spins that will occur on the play grid.

On some occasions, players may buy the bonus game for the cost of 100x the bet. If activated, will immediately launch the bonus round and provide another way of winning.

In conclusion, Tiger Kingdom Infinity Reels offers classic online slot games with an upgrade from its predecessors. Keeping the design simple as well as the lore gives that strong first impression  and sense of power which will attract players with the concept.