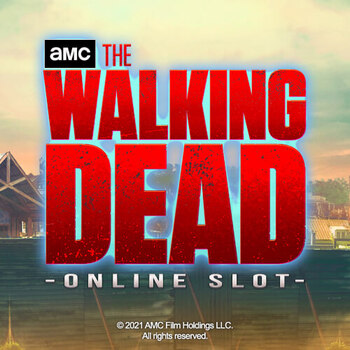 Produced by
Playtech
There are 50 fixed paylines, 3 rows, and 5 reels in The Walking Dead slot online. The Walking Dead slot machine with a post-apocalyptic theme, is based on the television show of the same name. It has an extremely wide betting range of 0.10 to 500. The RTP for The Walking Dead is 95.73 percent, which is slightly less than the 96 percent slot average. The variance is medium which may mean a good frequency of small wins and some rare large ones. The most you can win is 2,000 times your total bet.

About The Walking Dead

It's a branded title based on one of AMC's most popular TV shows, The Walking Dead. As premium symbols, we're seeing images of some of the series' main characters. This means we're dealing with icons in the form of Negan, Rick Grimes, Carol, Daryl, and Michonne. Rick Grimes is the best paying symbol, paying 0.2, 1, or 3 times your total bet for 3, 4, or 5 across any of the 50 paylines. Zombies serve as wilds in the game, while barrels provide support for the Free Games logo scatter. Finally, we have the low-paying Royals, who have various weapons next to them.

The Walking Dead slot game Wild symbol is the hand. It replaces all symbols except the scatter and coin symbols and pays like Rick Grimes (up to 3 x stake). When two or three Wild symbols appear on the same reel, it transforms into a zombie wild. The Walking Dead online slot Scatter symbol is the three shields. Coin symbols appear on the reels to represent cash, a key, or a Biohazard Sign.

The Walking Dead game has six bonus features. There are 5 free spins features with Wild reels, multipliers, shifting stacks of coins, Wild Walkers wild reels, respins, and coins that can lead to more cash prizes, in addition to The Tower feature that awards cash prizes and four fixed jackpots.

The Walking Dead at Genting Casino

The Walking Dead is available at Genting Casino. The site offers an excellent variety of slots, table games, and live casino games. Visit Genting Casino online and enjoy these games at the comfort of your own home using any device. The Walking Dead is a great game for beginners and long-time players. You don’t have to be a fan of the show to find something to enjoy in this game. It is loaded with features and graphics that many players will like.