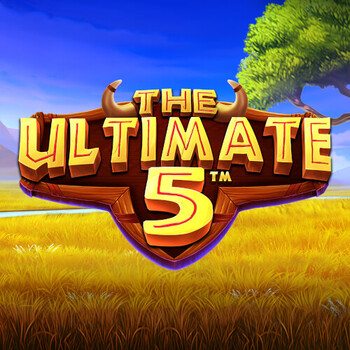 Produced by
Pragmatic
Pragmatic Play developed The Ultimate 5 slot game. The game has a wild safari theme, which is visually, easily recognizable. The design and graphics of the game looked dated. The backdrop of the reels looks like a never ending Savannah, and an odd tree or two dotted around. Once in a while, players can see an antelope that jumps across the screen, and also a bird, flying by. The soundtrack has an African vibe to it, which is catchy and pleasant. And it goes well with the winning sounds, as the beat and tempo increases.

Play The Ultimate 5 slot. The game is set on a 5 reels with 20 paylines filled with wild animals, wild symbols, and scatters that trigger both free spins or a respin instant feature. The animal symbols each have their own corresponding value. The lion is the highest paid of the lot, followed by the cheetah, then the elephant, the rhino, then the Buffalo. Other than the animals, The Ultimate 5 game also has the standard poker card symbols of 10 to Ace. The Ultimate 5 slot game RTP varies. At the highest level, its RTP sends back to the players 96.5% of what’s wagered. Lower RTP values are also possible if the operator wants to use them. The game has a high volatility, but still manages to keep things fair. Players can bet from 0.20 to a maximum of 100.00 per spin. The tree represents the game’s wild symbol. The wild can substitute symbols on the reels to help players land a winning combination. And the Diamond symbol is the scatter of the game.

As mentioned, the Diamond is the symbol for the scatter, which can only land once per reel. Having it appear 3 to 5 times will both pay 5X to 50X the stake. And will also trigger between 8 and 12 free spins.

During The Ultimate 5 slot online free spins, the reel sets level up, progressively removing the lowest value symbols from the reels. And players can retrigger the free spins with only 2 scatters.

The Hold & Spin Super Boost Feature of The Ultimate 5 slot machine triggers when players land a Money Sun symbol on reels 2, 3, and 4, and the triggering symbols become locked in the centre of the 3 middle reels on a new and cleared grid no matter where they landed. The money symbol comes with random values between 1-8x and 10X a player’s stake.

The Hot & Spin feature of The Ultimate 5 starts players with 3 spins. And the tally resets for each new non-blank symbol players lock in place on the grid.

The Ultimate 5 at Genting Casino