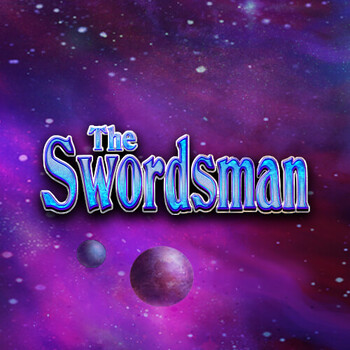 Prepare to enter a realm filled with wizardry and enormous weaponry in The Swordsman slot. This game's plot revolves around a man who originally picked up a sword in order to protect his planet from invaders and their oppressive plans.

Players of The Swordsman appear to have many opportunities to win in this fantasy-themed game thanks to its 50 paylines distributed across six reels. There are a few features to keep you satisfied. In addition to the super stacks feature, which causes arbitrary mystery symbols to appear on the reels, it contains the conventional wilds and a fantastic bonus spins feature.

When it comes to payouts the Q, K, and A symbols pay from 1x to 20x, the three gold rings pay 30 times, The three princesses that make up the game's high-paying symbols all pay between 8 and 60 times your line bet.  If you get six of a kind on the reels, you can win 100 times your line wager.

The scatter symbol is the only symbol that won't be replaced by the slot machine's wild symbol in an attempt to produce a winning combination. During the base game, the Super Stacks feature is active. Each spin's mystery symbols on the reels will change into a random symbol that can show up stacked.

You have a significantly larger probability of matching multiples of a kind and winning a respectable sum of money because all mystery symbols will change into the same one. Sword is the scatter symbol, and it can only be found on reels 2, 3, 4, and 5. You need to get between 12 and 16 scatters to start the bonus games bonus. You will receive the same number of bonus spins as a result.

Set foot into the world of warriors as you join in The Swordsman slot on Genting Casino that can be played on any mobile device. Set a spending limit for gaming and adhere to it.