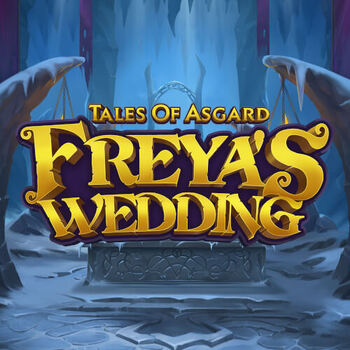 Produced by
Play N Go
When you play Tales of Asgard: Freya's Wedding, the lighter maths model and below-average (for Play'n GO) potential can be a little understated, especially when compared to Loki's Fortune's huge figures. Players get a medium volatile machine this time with a 6 out of 10 volatility rating and a variable RTP value that tops out at 96.4%. It's somewhat a higher return value than usual for a Play'n GO slot. Tales of Asgard Freya's Wedding can be played on any device. 30 fixed paylines, which produce winnings when at least three matching symbols drop across them from the left-hand side, account for the relatively unique stake range, which ranges from 0.30 to 90 in every play. Four runes, beer mugs, salmon fillets, and large chunks of meat worth 1 to 3.5x for a five of a kind win make up symbols that are low to medium value. In Tales of Asgard: Freya's Wedding slot machine, Heimdall, Loki, and Thrym appear to be the three premiums. Five premiums are worth 5 to 10 times the stake in the base game, and 10 to 20 times the bet in free spins.

About Tales of Asgard: Freya's Wedding

If you're used to the Mighty Thor flexing his cracking heads, supernatural muscles, and swinging hammers, you'll love Tales of Asgard: Freya's Wedding slot online. After stealing Mjolnir one day, the giant Thrym decided to return it in exchange for Freya's hand in marriage. Naturally, she refused, so Heimdall devised a plan to disguise Thor as Freya in a bridal gown and invade Thrym's cradle in order to reclaim the hammer. When Mjolnir was returned to Thor, the god became upset and killed Thrym with it, possibly along with other giants, depending on who is narrating the story.

Game developer Play'n GO has made full use of it in Tales of Asgard Freya's Wedding slot game, a sequel to Tales of Asgard Loki's Fortune. On a 5-reel, 30-payline game grid, the action takes place in Jotunheim, the freezing world of the giants. Play'n GO has gone for an icy blue portrayal of the wedding reception, with symbols like beer, food, and Thor in a wedding gown. These symbols appear on the reels and in the low-key cold background, similar to Loki's Fortune.

There are two slot features when you play Tales of Asgard: Freya's Wedding slot: Wilds and Free Spins.

The majority of the best moments are centred around wilds, which can substitute for any pay symbol in a variety of ways. 'Freya' wilds, which are 1x1 in size and valued up to 50x the stake for five of a type, occur on any reel in the base game. Freya can appear on any basic game spin, resulting in an extended 1x4 Freya Wild with an x2 multiplier, ensuring a win.

When three or more scatters appear on reels 1, 3, or 5, you'll get a free spin in Tales of Asgard: Freya's Wedding game. Freya Wilds are replaced by Thor Wilds in the free spins round, and a Thor Wild symbol expands on reel 5 at the start of the bonus round. The extended wild moves one reel to the left after each free spin, increasing its multiplier by one, from x1 to x10.

Free spins will continue as long as a Thor Wild expands on the reels. A respin is provided when a spin occurs and no expanding Thor Wild appears. The current multiplier value is carried over if an Expanded Thor Wildlands on the respin, and the feature will continue up to a maximum of 30 free spins.