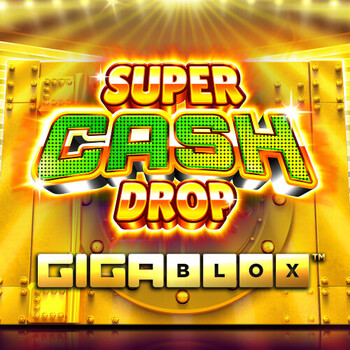 The game design is a cash theme, and players find themselves inside a bank vault filled with cash and gold coins. Card symbols like diamonds, hearts, clubs, and spades have lower values, giving players 1X their bet if they land 6 of the dame symbol type. The symbol of a piggy bank and a wallet gives players 1.5X their bet, if they land 6 of the same symbol types. And the highest paying symbols are the gold bars and a red dollar sign. Land 6 of these same symbols and players get 2X to 2.5X of their wagers. The symbol for Wilds is the banknote bundle. The banknote bundle can replace any symbol, except the scatter on the reels, which gives players a chance to create a winning combination. The scatter symbol in the game is a golden vault door.

This feature triggers at random and it expands Super Cash Drop Gigablox slot online’s reel set with extra rows and paylines. This means players will get to play between 4-6 rows and give them 40, 50, or 60 paylines.

As an example, when players land 3 wilds on 1 reel, and 2 wilds on another, the expanded wilds will receive X3 and X2 respectively. If 2 expanded wilds are included in the same winning combination, their multipliers will be added together.

If Super Stretch Wilds is activated, and one expanded wild has a golden colour, this feature is triggered. Players will receive a respin where all expanded wilds stay with their multipliers. Each time you land a new wild, a respin is awarded.

In the Super Cash Drop Gigablox slot machine, players need at least 5 scatter symbols to activate this feature. Players get 1 free spin per triggering scatter. This means that players can get as much as 36 free spins.