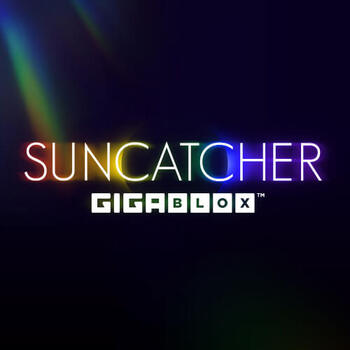 Try to harness the sun's immense power with Suncatcher Gigablox slot. This will transport you to the Suncatchers' cosmic world, where collecting the crystalline sun shards can result in a variety of fantastic rewards.

There are 10 win-both-ways paylines on its 5 reels in this slot and each spin can result in the landing of gigablox up to 3x3. Wilds can appear anywhere on the five reels and expand to become sticky for one more spin.

Per spin, a random number of reels merge to form one or two gigablox giant symbols. When the gigablox land, they separate into matching regular-sized 1x1 symbols. If you like, you can activate the Golden Bet option. This will cost you two times as much per spin, but the number of diamond wilds on the reel strips will increase by three.

Every time a diamond wild appears, the entire reel is covered by it, and the Wild Respin function is also activated. The remaining reels respin while the enlarged wild or expanded wilds stay frozen in place. The pay-both-ways engine is useful since it makes it much simpler to win when wilds appear anywhere on the reels.

Here, expanding wilds can appear on any of the five reels, not only the middle three. This implies that since any fresh wilds you land also become sticky and award a new respin, you can receive up to 5 consecutive respins. For five on a payline, the wilds pay 50x (both ways). Along with your standard rewards from the wild respins feature, filling the screen entirely with wilds awards 500x your stake. The respins feature is practically over after the 500x highest victory is achieved.

Prepare yourself for a solar reel journey as you join the Suncatcher Gigablox slot on Genting Casino. It can be played on any gadget. But keep in mind to take regular breaks, and constantly keep a check on your spending.