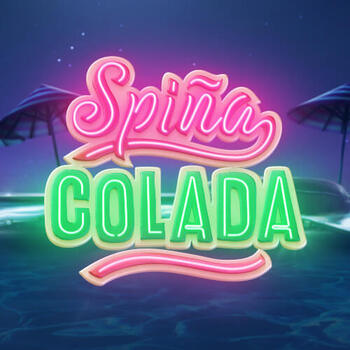 Produced by
Yggdrasil
Yggdrasil Gaming's Spina Colada slot game is a tropical cocktail-themed 5 reel, 25 payline slot. During the base game, four different bonus features are available, as well as re-spins, sticky symbols, and a free spins round. Spina Colada online slot can be played on all platforms with wagers ranging from 0.25 to 125 per spin. With medium to high volatility, Spina Colada slot machine has a return to player (RTP) of 96.3%. The maximum potential win for Spina Colada is capped at 400,000.

The Spina Colada slot overall design is lively and colourful, which makes for a really enjoyable gaming experience. The action is set at the edge of a pool, with Tiki bars and palm trees surrounding it. The graphics are of a very top quality. Images on the reels depict fruit cocktails as well as the fruits used to make them. Fruit symbols with a lower value are represented by watermelon, pineapple, kiwi, orange, and strawberry. The value of the cocktails is much higher; the blue lagoon is in the middle, with the martini being the least valuable and the cosmopolitan being the most.

All of the previously mentioned eight symbols can be replaced by the "Spina Colada" wild card, which can appear in any position on the reels. In the Spina Colada game, there is no scatter; however, at the conclusion of each regular spin, a Feature Cap will randomly appear across the reels. There are four different colours and rewards, so the objective is to collect four of a kind.

You can activate the Freeze, Respin, and Common Multiplier feature when frozen symbols appear on the reels. Up until there are no more frozen symbols, you can respin. To multiply your win, fill consecutive columns from the left. The roof is littered with multipliers.

You receive feature caps at random, and you can win four free spins if you can collect four of the same colour. There are several caps, including the 2nd Chance, Full Line, Extra Wild, and Guaranteed Win x3 caps.

When the round would otherwise be over, the "2nd Chance" feature will give you one or two winning symbols. The round will begin with a free 5-of-a-kind win if the Full Line feature is enabled. The Extra Wilds feature will begin the round with two free wilds and additional wilds on the reels. Guaranteed Win 3x will re-spin until you win and multiply your win by three.

What is the maximum bet for Spina Colada?

The maximum bet for Spina Colada is 125.

What is the minimum bet for Spina Colada?

The minimum bet for Spina Colada is 0.25.

Can I play Spina Colada on mobile?

Yes, you can play Spina Collada on any Android or iOS device.

What is the RTP of Spina Colada?

What is the biggest potential win for Spina Colada?

The biggest potential win for Spina Colada is capped at 400,000.

Genting Casino is the best site to play Spina Colada slot online. Slots, table games, and live casino games are all available on the website. You can play these games using any device at Genting Casino online in the convenience of your own home. Genting Casino has them. The quality of the graphics and the long list of features that have been included in Spina Colada both contribute to the game's potential for great fun.