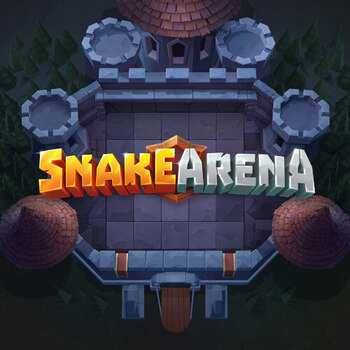 Did you have a Nokia in the 90’s? Chances are you came across this very popular game where you maneuver a growing line around the screen that eventually becomes a primary obstacle to itself - that’s right, we’re talking about Snake! However, in this epic twist, Snake has been deliberately starved and has a vengeful appetite for knights.

This is a 5x5 slot game with high volatility, a Return to Player of 96.25%, minimum bet of 0.10 and a maximum of 100.00 across 30 paylines. The knight symbol and any part of Snake are Wild symbols and substitutes for all other symbols. The Wild Chase feature triggers randomly, the reels will spin and Snake and the Knight peek out from opposite ends of the screen. If they peek on the same reel, Snake makes a lunge for the Knight and turns the whole reel Wild. They get three chances to match, if they don’t land on the same reel in those chances there will be no more Wilds and the spin comes to a stop - the Wild Chase feature awards at least one wild reel, but it can turn all reels Wild. The Free Spins feature is triggered by landing the Snakehead and Knight. Before a new spin, Snake moves towards the Knight and if he reaches it he will consume it, resulting in growing in length. If Snake’s body is in the way however, Snake will crash and the Free Spins will end. Should Snake fill all positions on reel 2-5, the Free Spins feature ends and an additional prize on 1000x the stake will be awarded. Wins are evaluated consecutively on a payline, starting from the leftmost reel with winning combinations and payouts made according to the paytable and only the highest paying combination for each payline paid. To play, press the stacked coins icon to place your bet and then press the spin symbol to start the game.

Snake Arena is available to play on the browser at Genting Casino - but, don’t get too ‘consumed’ with this game and only bet what you’re comfortable with.