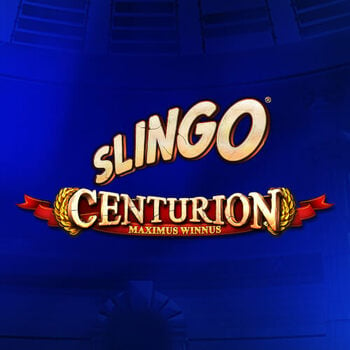 Produced by
Slingo
March on to victory and potentially big wins in Slingo Centurion, a combination of bingo and slot gameplay set in Ancient Rome! You could win as much as 10,000x your bet if you get a Full House, and there are some fantastic bonus features ready to play as you mark off lines, too. Start spinning to see if you can achieve Slingos, climb the bonus ladder, and grab the top payouts! 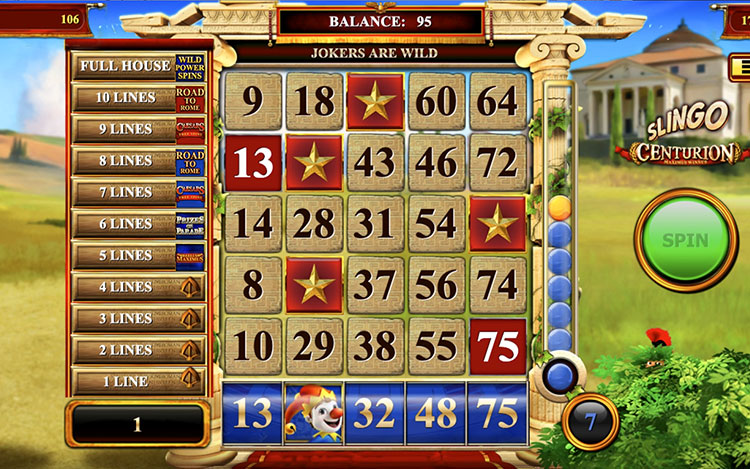 Slingo Originals released its Slingo Centurion slot game in 2021. This combines the popular Slingo gameplay with an Ancient Roman theme, with increasing prizes available as you climb the bonus ladder. The graphics reflect the theme brilliantly, with Roman columns on either side of the grid and armoured Centurions appearing throughout.

The range of bonus features in Slingo Centurion is amazing, with free spins, a board game-style round, and more available if you can reach the higher rungs of the bonus ladder. This variety in gameplay and design keeps Slingo Centurion feeling fresh from start to finish.

Watch out for special symbols on the reel, too — you may land the Joker, Super Joker, or Free Spin symbols that help you mark lines off faster!

Soldiers wielding massive shields appear, each of which offers multiple multipliers. A dancing light flashes from one multiplier to another — you need to stop the light to win one of the prizes on parade. Landing on an arrow will take you to the next shield and let you play for higher multipliers.

You’ll receive up to 12 free spins and a multiplier (maximum of 10x) awarded randomly from 2 spinning wheels. You’ll play your free spins on the standard reels.

This feature transplants the action from the Slingo grid to a board with a Centurion under your control. You’ll have five chances to roll the dice and guide the soldier around the board, gathering prizes along the way.

Land on the dice icons on the board to grab extra rolls and extend this bonus feature. You can win a generous cash prize if you reach Rome!

This is a higher-level version of the Caesar’s Free Spins feature, with more multipliers and free spins available.

This is a higher-level version of the Road to Rome feature, with more valuable prizes available on the board. The aim of the Slingo Centurion game is to match numbers on the reel with those on the grid, similar to traditional bingo gameplay. You’ll achieve a Slingo if you mark off 5 numbers on a line across the grid.

Use the SPIN button to spin the reel and see if you can match any numbers. Special symbols that affect gameplay in specific ways may appear on the reel. For example, Joker and Super Joker symbols allow you to choose numbers to mark off, while Devils block you from matching numbers.

Free Spin symbols may land on the reel, too, and award an additional spin. You can buy Extra Spins when a game ends and get more chances to win.

As you complete more and more lines in Slingo Centurion, you’ll get to play the various bonus features. You need to complete 5 lines to play the first feature, the Reelus Maximus, and a Full House to try the top Wild Power Spins feature.

You can track your progress with the bonus ladder on the left-hand side of the grid: the number of marked-off lines are highlighted on the ladder, and the different bonus features are displayed clearly. Your total stake is shown at the bottom of this section, too. Click on the menu button to view information on playing the Slingo Centurion slot online.

What is the maximum bet for Slingo Centurion?

The Slingo Centurion online slot accepts a maximum bet of £2. Use the PLUS button to set your stake to your preferred level.

What is the minimum bet for Slingo Centurion?

You can bet a minimum of £0.20 on Slingo Centurion.

Can I play Slingo Centurion on mobile?

Slingo Centurion can be played on a mobile device.

What is the RTP of Slingo Centurion?

Slingo Centurion has an RTP of 95%.

What is the biggest potential win for Slingo Centurion?

The biggest potential win available in the Slingo Centurion slot machine is 10,000x your bet.

About the Game Provider: Slingo Originals

Slingo Originals was founded in 1996 and has been around for almost two decades. Sal Falciglia Senior, a US businessman, created the game after deciding that the world needed a game that merged the finest of slots gambling with bingo. Slingo is widely regarded as the first 'casual' online game, having debuted on the AOL platform before moving on to MSN. From there, the Slingo brand spread to Facebook and CD ROMs before landing on mobile devices, where gamers all around the world may enjoy it. The simplicity of the core premise is one of the key reasons for Slingo's continued success. Players must form winning lines, much like in bingo, utilising symbols that spin up using a slot machine-style logic. Slingo has two licences for online gaming. The UK Gambling Commission and the Maltese Gaming Authority both issue them. There have been a slew of popular Slingo Originals games since the original Slingo games, including Slingo Fortunes, Dragons Gems, and KatChing.

Slingo Centurion is packed with terrific bonus features and opportunities to win real-money prizes, played in a colourful Ancient Roman setting. Start spinning the reel and try to climb the bonus ladder on your quest to win!

Sign up at Genting Casino to play Slingo Centurion and many other slots, table games, and live casino games from top providers!