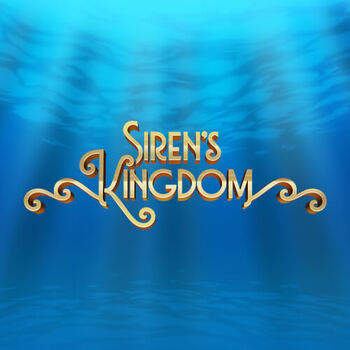 Descend below the water's surface to the brilliant blue seabed where you are amongst the colourful vegetation, bubbles and Siren’s.

Siren’s Kingdom is a 5x3 video slot game with a Return to Player of 96.18%, minimum bet of 0.30 and maximum of 150.00. You play a fixed 30 lines per spin (1 coin per line) and the total bet value is shown on the bet bar. To play, change the bet value by opening the bet panel and select any number using the arrows. Then, press the spin button to play the game at the current bet value. Featured are various beautiful shells, a starfish containing a shiny pearl and the crowned Siren herself as the Wild symbol. The Wild Siren will appear on any top position of the reels and is a substitute for all symbols - except the Free Spin symbol which is represented by a golden octopus holding a pearl. These Wilds pay as if they were the highest paying symbol on any line and you can land more than one at a time. Unlock the Bonus round by landing 3 of the golden octopus Free Spins symbols in combination where you’ll be awarded 14 Free Spins. But, land 4 or 5 in combination and you’ll get 25 or 36 Free Spins respectively. During the Free Spins round, the Wild becomes a Sticky Wild when she lands. She will then expand in two different directions on the second spin, after which she will disappear, having given you the potential for some very big wins in the process. Winning combinations and payouts are made according to the paytable and only the highest winning combination on an active bet line from left to right is paid.

Siren’s Kingdom is available to play on the browser at Genting Casino, but don't let the Siren’s lure you in with their sweet tones only to dash you against the rocks - only bet what you’re comfortable with!