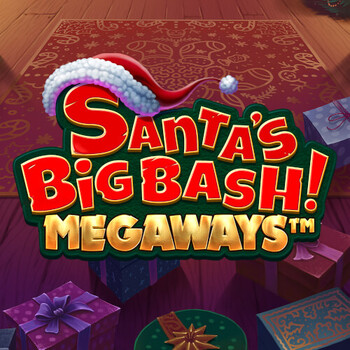 Produced by
IronDog
What does Santa do in his downtime? Well, according to Iron Dog Studios he parties hard. The Santa's Big Bash Megaways is a fun festive slot machine with a celebratory vibe that boasts a whole host of entertaining and exciting features.

The Santa's Big Bash Megaways slot machine is one big party from start to finish, but let’s get down to the nitty-gritty information. Of course, there’s a festive theme, but there’s also some great payout potential thanks to the use of the Megaways system. The Santa's Big Bash Megaways game has 6 reels and tons of ways to win with every spin (from 64-177,649 win ways) thanks to tumbling reels; which we’ll talk about later.

Of course, the symbols used in the Santa's Big Bash Megaways game are fittingly festive and include pixies, gingerbread, scrooge lookalikes, as well as Santa and his elves. Low-paying symbols are represented by the playing card symbols 10-A. The wild symbol is represented by a wrapped present.

There are all the trimmings on offer in the Santa's Big Bash Megaways slot starting, of course, with the tumbling reels feature included in all Megaways slots. Each time a winning combination is landed on the reels it will be highlighted and removed from play, making space for new symbols. This can cause a chain reaction of wins and lead to some serious payout potential.

Magic Baubles will appear during tumbles in the base game of the Santa's Big Bash Megaways slot machine. Up to three of them can appear at a time and each symbol will advance the free spins trail 1-3 spaces.

The free spins bonus round is triggered by filling at least 8 positions on the Christmas tree free spins trail, the number of free spins up for grabs are as follows:

During free spins, a global win multiplier comes into play. Each time a tumble occurs the multiplier will increase by 1x. If 7 symbols land on a reel then the reel will become locked for the rest of the free spins.

Players can purchase direct access to the free spins bonus round for between 70-250x your stake amount.

If you’re a bit of a party animal then you’re going to want to play Santa's Big Bash Megaways this festive season. Don’t get too carried away though, and always gamble responsibly. At Genting Casino, we always promote responsible gaming and have created a safe play environment for our players.