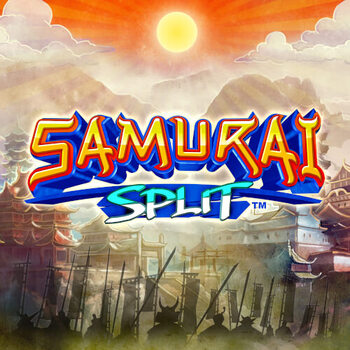 Set in a traditional Japanese village, leap head-on to the spinning reels while wielding a sword in a game of luck! If you’re looking for a classic addition to your slot favorites, Samura Split guarantees a nostalgic gambling experience with thrilling features to watch out for.

Played on a 5-reel, 25-payline video slot machine, Samurai Split is enjoyable by placing a bet between 40p to 20 per spin. Samurai Split's visuals feature cartoon-style images with an iconic Japanese village in the background.

The symbols on the slot reels fit perfectly to the game's distinctive theme as it includes bottles, samurai swords, samurai warriors on horses, Japanese temples, and masks in addition to the standard playing cards like A, K, Q, J, and 10.

The emblem which serves as the slot's wild symbol can substitute for any other symbol, except the scatter. Wilds can also pay out up to 12.5 times your wager for five of a kind on a payline. Any winning symbol can turn into a split symbol during the Samurai Split's Split Symbol Bonus feature, which is randomly activated during the base game. The more split symbols you have, the larger your overall win will be. In addition to these, landing 1, 2, 3, 4, or 5 split symbols on the reels can reward a multiplier of 2x, 4x, 8x, 16x, or 32x.

Another feature to watch out for is the Warrior Spin feature, which can be triggered randomly during any base game spin. During this bonus, only wild and scatter symbols, as well as icons like horses, swords, and bottles, are available. In essence, the low pay symbols are eliminated to enhance the winning ways.

Channel your inner warrior fantasies by registering to Samurai Split on Genting Casino, available on all devices. Keep in mind to set a reasonable gaming budget and play responsibly.