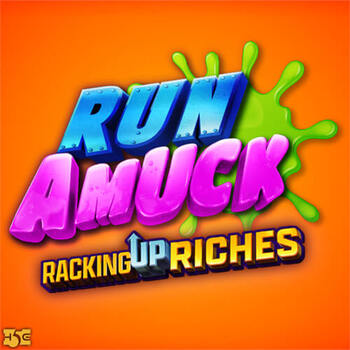 Run Amuck is a cartoon-style game with plenty of humor. Run Amuck is played on a 7x7 grid. We say ‘spin’ but what actually happens is that symbols grow from the middle of the 49 symbol positions to cover the whole grid in a split second. The game has a cluster reward system, and you need four or more examples of the same symbol grouped together for a win. You can start placing your bets from a minimum of 0.20 up to a maximum of 400 per spin. It has a decent Return to Player Rate of 96%. Four colorful beakers and bottles feature on the grid, plus green, orange, purple, and blue bacteria. The lower paying symbols can appear as singles, doubles, or triples in one spot, while the bug-eyed bugs can take on baby forms of themselves in a dish or as all-singing, all-dancing grown-up versions. Call them bacteria, germs, or microbes.

Four matched symbols appear as four test tubes, or the adult bacteria, which dance around in comical style. Once all symbols have collapsed as far as they can, all non-winning symbols vanish, and new ones grow in their places.

If the new arrivals can collapse into four tubes or grown-up bacteria, the process repeats until the grid can create no new combinations.

A brightly lit piece of the lab equipment is a special bonus symbol. It only appears in the corner positions, and any three or four examples award eight or 30 free games.

Sign up for Run Amuck on Genting Casino, which is accessible on any mobile device. Always make sure you don’t exceed your budget and also remember to take a break every now and then.